Political Animals: How Our Stone-Age Brain Gets in the Way of Smart Politics by Rick Shenkman 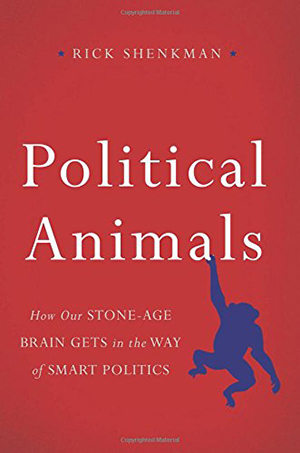 “It may seem as if I am leading up to the conclusion that we are by nature suckers,” Shenkman elaborates with entertaining and widely varying examples of our species’ cheater-eat-sucker and sucker-punish-cheater community constructs. The human mind excels at reasoning within groups of 150 or fewer. So with populations in every society swollen to record density, just how is any one of us meant to choose a reliable leader? One we will never meet face-to-face?

“As moral clarity recedes and old verities begin to crumble, we take refuge in our partisan identities, which put at our disposal handy, ready-made stories to help explain what makes the world tick.” Furthermore, “When we try to imagine what others feel, we almost always go for the extreme… the harder we try, the more warped our perspective becomes.”

This was a fun read. I had so many preconceived notions when I picked up this book (as you inevitably do), and one by one, Political Animals addressed my assumptions and why I held them in the first place. Shenkman balances political history, anthropology, neurology, psychology, social science, scandals, chimpanzee pranks, shark attacks, natural disasters, flawed empathy, and blind hope as artfully as a tightrope walker. (The source notes and index following this text is a full forty-nine pages long.) No one’s record is excused. The Founding Fathers, Lincoln, Roosevelt, Kennedy, Nixon, Reagan, Bush, Obama, and everyone in-between are pressed under the microscope.

Again and again I realized I was learning something new, rethinking an old topic in a fresh light, and prying my mind open to all the human behaviors around me… and within myself.

From navigating daily social cues to convincing ourselves that we are not liars even as we blab fibs, half-truths, and falsehoods fluently (all the while expecting pristine honesty from those around us), we human beings are evolved and equipped for survival. Survival in 2016, in a developed country, usually amounts to “getting along with others.” But in our modern world this confidence in our primitive hunter/gatherer mentality can be a dangerous beast, to say the least.

Each of Shenkman’s essays is diverse, unbiased, well-researched, and eye-opening… and all together never frays from the weave of one giant, bright red sweater emblazoned with the slogan: I voted for the candidate who shared my ideals, and all I got was this sleazeball politician.