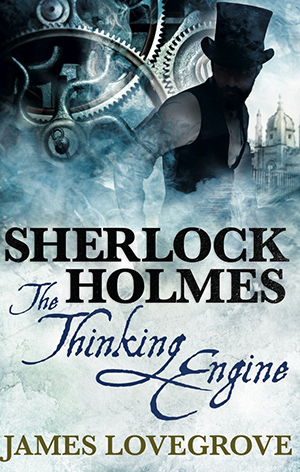 A Professor Quantock has built a revolutionary computational device, christened the Thinking Engine, which he claims is capable of analytical thought equal to or greater than any man alive, including Sherlock Holmes; a claim the professor is willing to put to the test, with the backing of the media and a prize of ₤500. Holmes cannot resist such a challenge, and travels to Oxford to compete with the machine in a battle of wits to see who can solve a series of local murders first.

The celebrity flame of Sherlock Holmes has never been extinguished since Sir Arthur Conan Doyle first brought the character to life – much to the chagrin of the author himself – but Sherlock’s fame seems to be especially bright now, with the recent movies starring Robert Downy, Jr., the British-American crime drama television series with Cumberbatch, and Elementary with Lucy Liu and Johnny Lee Mirror. Each of these shows reimagines the classic detective, Elementary and Sherlock transplanting the shows into modern times, while Robert Downy, Jr. gives the role an almost action superhero sheen. With such creative and popular interpretations, it seems almost strange to read a novel that tries to recreate the voice of Doyle and the original world of Sherlock. Such mimicry runs a risk that in denying the author’s own voice in favor of Doyle’s, the characters fail to bring anything new to the ongoing story of Sherlock Holmes. The Thinking Engine by James Lovegrove unfortunately falls into this trap, the characters being, in the end, forgettable versions of the archetypal detective and his trusted friend – with some character inconsistencies as well: at least in the part of Inspector Tomlinson, who starts out with the potential of being an interesting new side character and then loses any impetus his character had.

The plot itself is interesting, but there is an unavoidable disappointment in any Sherlock Holmes novel where the shape of the plot is obvious before the first page is read, and yet the great detective is completely and absolutely stymied for almost 300 pages. The plot hinges on Sherlock Holmes not even considering a potential reality for almost the entirety of the book – a logical flaw that is simply unbelievable in a man known for observing, considering, and mentally interrogating possible solutions to problems that simply don’t occur to others. To have Holmes consider a possibility and reject it, even if he is wrong to do so, is forgivable; to have the question not even occur to him is, unfortunately, unforgivable.

For die hard Sherlock Holmes fans, this novel may still be worth a read. Even if the majority of the novel can be reasoned well in advanced, there will still be some twists and turns that readers will probably not see coming. For the reader desiring a quick, escapist mystery, this may well fit the bill; but in the end, the novel will likely not stay on the bookshelf nor be remembered for very long.