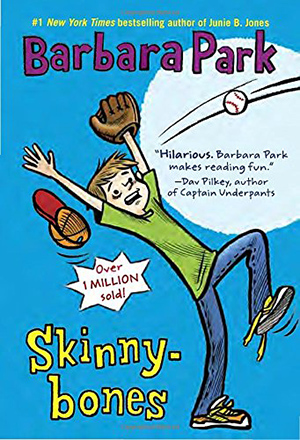 Skinnybones is the first book in the series by Barbara Park, the Junie B. Jones creator. With Park’s typical humor, she introduces the tween reader to Alex Frankovitch, otherwise known as Skinnybones due to his lanky and thin appearance. Alex is the class clown and often finds himself in lots of trouble since his teachers and parents do not share his humor. The book opens with Alex’s contest entry to Kitty Fritters. His entry is sarcastic, and again, contains Alex-inspired humor that adults don’t seem to enjoy.

During Alex’s classroom antics, his new classmate, T.J. Stoner, announces that he is the MVP pitcher on his baseball team back in San Diego. Additionally, T.J.’s brother plays professional baseball. Alex immediately decides that he does not like T.J., and announces that he plays baseball, too. It just so happens that T.J. and Alex’s teams are going to face off in a monumental game, which creates more than fear in Alex but he thinks ignoring the impending game might be the answer.

Park’s Skinnybones will have tween readers laughing but also learning valuable lessons. Readers will learn when humor might not be appropriate, how to be a good sport and the true definition of winning. Alex is a likeable character prone to trouble but also plagued with typical sixth grade angst so readers will naturally gravitate to his trials and tribulations, realizing that what seems insurmountable, really isn’t that bad after all.