The Airshipmen: A Novel Based on a True Story: A Tale of Love, Betrayal & Political Intrigue by David Dennington 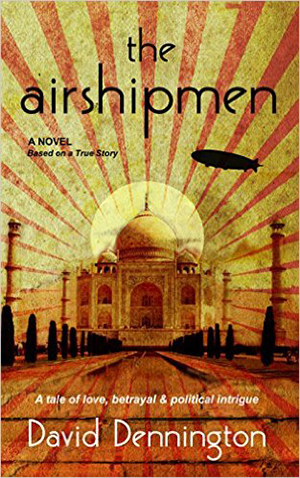 The Airshipmen, by David Dennington, is historical fiction based primarily in Britain in the 1920s and follows the sweeping passions and adventures of the airship industry. American WWI veteran, Lou Remington, left the Marine Corps and follows his passion for airships, which leads him to a position in the Navy upon the R38. During a final testing mission the R38 tears apart under stress and is destroyed. Lou is one of the few survivors and is severely injured. Despite his misfortune, Lou finds love and a simple life in the country. Lou and Charlotte’s quiet life ends abruptly when Lou is offered a position as a liaison for the British airship program. The government is setting up a program to build two sister-ships. One under the direct oversight of the government itself, and the other designed and built by a private company under contract. Lou can’t resist the opportunity to help build a safe airship so that the tragedy that befell the R38 would never happen again. However, the mounting costs and the egos of powerful men start to get in the way of common sense.

This is an incredibly detailed and complicated book, based off of real events and real historical figures. The story is told in third person, through multiple perspectives, and many different characters. David Dennington uses the narrative of Lou and Charlotte to string together the plot of the book, which due to the sheer number of characters and separate side plots, may have been too unwieldy otherwise. The new edition of the book, due to release shortly, will contain a list of the cast and characters, which many readers will likely find a useful reference – particularly since many of the characters, often the military personnel and politicians, will appear as either their last or first names as the situation demands. Lou and Charlotte are both beautifully flawed characters. Lou is haunted by his experiences in WWI, as well as the R38 disaster, but his love with airships keeps drawing him into a high-risk career path. Charlotte witnessed the R38 disaster firsthand. She doesn’t trust airships, and longs for her husband to walk away from them. Charlotte’s inability to get pregnant is another cause of strain. These two characters are in the thick of things, as most side characters are introduced through Lou’s job, and Charlotte’s networking with the local wives and families.

The story is political, as the Prime Minister, Ramsay MacDonald, and the Air Minister, Lord Christopher Birdwood Thompson are engaged in using the airship program to compete with the Germans, and to boost British morale. Certain characters are jockeying for position in the hopes of prestige and promotions, and others for their own sense of pride and self-worth. There is also quite a bit of personal drama in the book, as several characters’ relationships are a constant background to the larger narrative. For example, Lou is dealing with Charlotte’s stalker for much of the book, and Lord Thompson is in love with a seemingly unattainable princess.

The book is quite long, the first edition being well over 600 pages. It is also a slower read, although, definitely not a boring one. There is plenty of dialogue to help speed things up, as well as the various political and personal intrigues going on to keep the plot moving forward. However, the book may have benefited from some cuts, as there are several scenes that are told from multiple perspectives. While this extra content may help detail all the sides, they rarely add that much to the narrative as a whole, and could certainly have been shortened. There is also quite a bit of time jumping as chapters leap forwards and back a few years. This seems due to the author’s intent to organize the book according to subject matters (POV of the airship crew vs. the conversations of the politicians for example), but the time hopping helps to illustrate all the times we are fed the same information, albeit via slightly different means.

The Airshipmen is a very human story. It revolves around the human desire through history for “progress,” and how man’s pride can often get in the way of it’s better judgment. It also points out how things, once started, have a certain inertia, and how it can be very difficult to pin down where exactly things went wrong or who really deserves the blame. The book is an incredibly interesting fictionalized take on an important and experimental time in air travel history. Recommended for fans of history, air travel, and historical fiction with just a touch of fantasy, The Airshipmen is worth the time for those willing to tackle this hefty novel.