The Blood of the Celts: The New Ancestral Story by Jean Manco 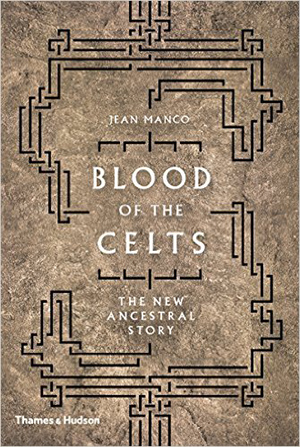 Jean Manco has been a building historian since 1986, but has recently turned her attention to European prehistory and early history.

This book follows on the heels of her similar work, Ancestral Journeys The Peopling of Europe from the First Venturers to the Vikings (2013, revised in 2015), an interesting but problematic book that brings together DNA, language, and archaeological and historical evidence for early migrations in Europe.

As an introduction to Celtic history this book is interesting. It tackles various aspects of the Celtic story, from Proto-Indo-European through Bell-Beaker Pottery Culture, down to Roman times and beyond. On the whole, the great value of this book is to establish a new framework basically constructed on DNA distributions for integrating archaeology, history, and language in a discourse on the deep history of the Celts. That being said, the task involved is complex, the body of literature in different disciplines is enormous and diverse, and the problems of reading genetic, archaeological, historical, and linguistic data without speaking properly the language of each one are multiple.

Most of the topics are covered in more depth and no less currency elsewhere, making this a kind of awkward synthesis of scholarship on a range of European pre-history topics. It is not always clear how these broader shifts directly influenced what became Celtic cultures – no real fault of the author, who explains and hypotheses within what is there. The problem is that the scholarship around this is still sketchy.

Indeed, archaeogenetics is in some ways just in its infancy and still has limitations to explain population movements and history at scales of high temporal and spatial (i.e., regional) resolution. In that sense, the results proposed in this book draw an interesting starting scene, but one that is constantly shifting. Because the DNA evidence is so incapable of telling the story of population movement when it is known, there is no reason to believe the conclusions reached about periods when there is no external control over the information.

For those not experienced in genetics, archeology, linguistics and/or geography (which exclusions would include the author herself), one is left to simply accept the assertions made.