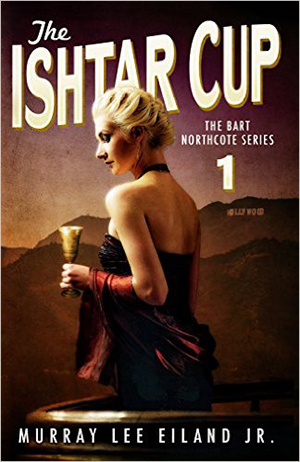 When Vanessa, a mysterious blonde without a last name, saunters into Private Investigator Bart Northcote’s office, his life takes a turn into something straight out of a mystery novel. Taking place in 1990s America, The Ishtar Cup reflects the country after the Gulf War and the fall of the Soviet Union, emphasizing the luxury that many lived in. Bart Northcote is no exception: His job offers lucrative pay and a life among the stars of Hollywood, with luxury to spare. As a result, Bart’s previous success in his work causes Vanessa to hire him; Vanessa and three acquaintances come into possession of a precious antique and hope to resell it for a large profit, that is, until she suspects that one of them will betray the rest and steal the antique for themselves. However, with the entrance of Vanessa and her job offer into his life, Bart soon becomes embroiled in a dangerous journey to find the truth behind the supposedly ancient Ishtar Cup. An antique, solid gold cup from the Ur dynasty, the Ishtar cup is worth several million dollars and is coveted by many, enough to incite murder.

Narrated from the viewpoint of Bart, the reader learns his opinions, beliefs, and ability to see the world through an investigator’s eyes. Beyond this, Bart proves to be a character who possesses a human aspect, breaking the literary fourth wall with his direct address to the reader. Rather than an actual novel, The Ishtar Cup reads more as a commentary, as if Bart speaks directly to the reader, inciting human emotion and connection between the reader and the actions occurring within the plot. Although some of the writing lacks elegance, the manner and style of the novel drive the plot continuously forwards, preventing any dull moments from interfering with enjoyment of the novel.

Readers who have previously enjoyed mystery, crime, and action novels will thoroughly enjoy uncovering the truth in The Ishtar Cup.