Uncontrolled Spin: The Power and Danger of Spin by Jerry Summers 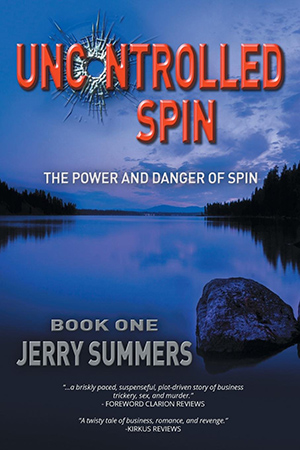 Uncontrolled Spin may be puzzling until an examination of the author’s credentials gives clues to the unusual style. Mr. Summers has a long history in law enforcement, which pretty much explains why it reads like a police report. He also has a master’s degree in business administration and advertising. This is important because now readers know why the business activities and police procedures seem to ring so true to life. The rest, not so much.

The book tells the story of several sets of rich people who live the high life and do “business,” Until they finally go too far and someone gets killed.

Sean Green is CEO of Sean Green Marketing. Jessica Silva is CEO of Beauty Boutique. They meet, and sparks fly. In time, though, they connect, discover a business opportunity in Brazil, and the story is set in motion.

Sean and Mark Green, the CEO of Global Mining Corp, fly their private jet to Brazil, where they bribe Ricardo to accept disadvantageous terms of a contract. While they are there, they discover the existence of a recently abandoned Nike factory, which would be perfect for Ms. Silva’s Beauty boutique expansion. Over time, and meetings, an understanding is reached. However, due to the death of one of the businessmen, the deal is restructured so as to ‘cheat’ Ricardo out of fifteen million dollars. Nasty business, but the principals seem to feel it’s as usual.

It is actually as interesting to read the book to puzzle over the style, as it is the story. All of the people act how the general population tends to imagine rich people act. Everything is portrayed as special for them. The food, drink and accommodations read like product placements in movies, and the characters are self-centered and light hearted as long as everything goes their way.

The book starts out like a romantic comedy and adds elements of bodice/fly ripper novels with a couple of fairly graphic sex scenes that read like the ones in 60s pulp novels. These, and most all of the interactions between characters are overwrought and often inappropriate to the circumstances. Hopefully the amateurish tone will have improved in book two: Unmerited Favor.