Crouching Tiger: What China’s Militarism Means for the World by Peter Navarro 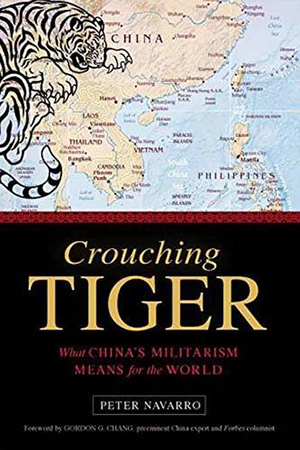 That this book has a forward by Gordon Chang should give anyone pause to consider the seriousness of Navarro’s book.

Gordon G. Chang is a Chinese-American lawyer and author who is considered by some as a “China expert.” Chang was best known for his book The Coming Collapse of China in 2001. He used to work in Citibank in Hong Kong and Shanghai and t`he Crédit Agricole Corporate and Investment Bank, but lacks economic training. Bearish about the Chinese economy, Chang often makes false projections about China’s collapse and without any apology he would then come up with another drastic projection. In the forward, he claims that China can no longer reliably create economic growth and is now therefore “falling back on its last resort: a militant and revanchist nationalism.”

It is not clear upon what statistics either Chang or Navarro rely. The Chinese economy grew at an annual pace of 8.9% in the fourth quarter of 2015, marking a slowdown from a 9.1% growth rate in the prior quarter. Though the U.S. economy is still the largest in the world, it grew at a mere 1.8% in the third quarter. China, the world’s second largest economy, has grown at an average annual rate of about 10% for the last 30 years.

Peter Navarro is a Professor of Economics and Public Policy at the Paul Merage School of Business, University of California, Irvine and holds a Ph.D. in Economics from Harvard University (and a three-time loser in local elections). The source of Navarro’s self-proclaimed expertise in International, regional, or Chinese politics is unclear. Far from providing a work of academic scholarship, Navarro has presented (yet another) polemical anti-Chinese diatribe.

In his book, Navarro has complied excerpts from interviews with more than thirty experts but it is not known what the experts say but from the snippets of quotations from some of these experts, it is evident that they are all anti-China “experts.” The questions posed at the top of each chapter are not only loaded, but many are also hypocritical. Note for example those in Chapter 39, in which Navarro asks: “Which of these statements most accurately characterizes China’s perspective on transparency, negotiations, and the rule of law: 1. China likes to build direct communication links to minimize tensions and avoid miscalculations; 2. China favors transparency when it comes to revealing its military capabilities; 3. China prefers to operate in a multilateral, rather than bilateral, negotiating framework and does not seek to gain leverage over smaller nations; 4. China plays strictly within the rules of international organizations such as the United Nations and World Trade Organization; 5. China has a strong track record in abiding by the agreements that it negotiates. The answers are virtually ‘None of the above.’” The same can be said if one were to substitute America for China – only America may appear an even bigger version of the depicted China. Look also to those in Chapter 42, or Chapter 29, for more amusing examples.

Navarro’s book is little more than a re-hashing of the “yellow peril” China bashing that was prevalent in the 19th century that led to the infamous Chinese Exclusion Act. The book is wrapped in inflammatory language and makes wild assertions about China’s foreign policy with little to no academic support.

The book marks a spin-off of earlier, equally inflammatory and context-devoid compilations of opinions by Navarro, someone who has but scant understanding of the complex dynamics of geopolitics and the rise and decline of nations. See, e.g., Death by China, by Navarro and Greg Autry. See also The Coming China Wars by Navarro.

The book provides no contribution to the discussion of Chinese politics, or International/regional politics in general.