How to Grow an Addict by J.A. Wright 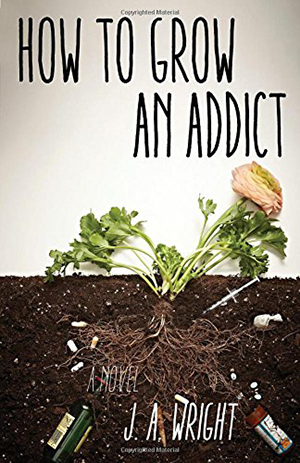 J.A. Wright’s How to Grow an Addict, is a novelization about Randall, a young girl who is trying to navigate the testy waters of her family life and come out unscathed despite growing up in a house full of addicts and abusers. It reads like a memoir, a sort of “come clean” string of consciousness that chronicles her rise (or rather, fall) from a young girl to a young woman.

The novel is literally what the title implies, a sort of explanation of a series of factors both genetic and environmental that lead to the rise of a small, precocious, and anxious child becoming a full blown addict. Randall has an abusive father and a mother who has a hard time defending her as it is clear that she’s terrified of losing him (going so far as to get breast implants in a failed attempt to stop him from sleeping around). He behaves like he hates Randall, and she chews her fingernails to nubs as a result – and has a hard time functioning in a normal world without fidgeting.

Randall is immensely likable, and though the reader begins to see her make a series of missteps as she gets older in an attempt to seek out love in “all the wrong places,” the novel never takes on a judgmental tone. Randall is just a girl who’s trying to navigate a very difficult situation that gets increasingly more difficult as life takes away some of her fiercest protectors and supporters. She is selfish, but only in a way that an addict is – someone who cannot see past their impulsive decisions into what the consequences may mean. It doesn’t matter to her as she’s just trying to get by in the only way she knows how. Her family resembles a million families, and some readers might even see some parallels between her family and their own in an alcoholic, abusive father who prioritizes a son above a daughter and creates another monster in the process; her brother who comes to hate her and lack empathy as much as her father does; her mother who is not perfect, but sad and unable to manage an angry and abusive husband, and who turns to anti-anxiety pills and alcohol as a way to cope.

The novel ends with Randall beginning to accept help from those who have to foist it onto her and ends with an uplifting message: people can make a choice to recover and do the right thing. There may be mistakes and trip-ups in the process, but it’s a process worth doing. This is a great book, and even if readers don’t have first-hand experience with addicts or dysfunctional families, Randall feels real-life enough to turn to when it comes to trying to deal with real-life addiction. Readers should definitely give this one a shot.