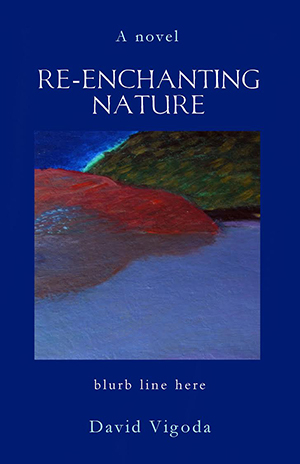 David Vigoda wants the reader to think that former photojournalist Frank is not a missionary spreading his dead wife’s religious views in a grief induced obsession, but this is the precise definition of the main character of Re-enchanting Nature. Frank is obsessed with the “sacred,” though ostensibly not in the typical definitions “dedicated or set apart for the service or worship of a deity” or “connected with God (or the gods) or dedicated to a religious purpose and so deserving veneration,” and sees this in anything he does not relate to “Science.” He calls his beliefs ‘non-science’ and he feels that he is on a quest. Every time Frank’s delusional “quest” falters he flails around in some truly dramatic fashion until it realigns itself.

Vigoda attempted to craft a sturdy and realistic sounding board for Frank in the divinely beautiful Aurore, supposedly both a physicist studying chaos theory, and a talented potter. Aurore feels no love, wonder, or joy for either profession. She is also a single mother, being married but separated, and Frank is as in love with her young daughter, Emmanuelle, as he is her – maybe more so in fact – in a manner that only occasionally comes across as creepy. Unfortunately Aurore is a terrible stereotype of moral-less Scientist; sleeping around, dismissing her daughter’s imagination, refusing to respectfully discuss mythology and philosophy (though she has taken philosophy classes), and generally acting as though she cannot think her way out of a box unless the almighty Science says it’s okay.

This novel is what would happen if someone were given the assignment of taking every logical fallacy possible and using them to craft an argument amounting to the conclusion that awful Science is making everyone numb, it’s no good for nature, those awful Scientists are ruining everything, and that they don’t understand that there’s a reality on top of the physical one that must be real, purely because they cannot see, touch or understand it. This argument must assert frequently that it does not conflict with science and respects scientists. It must imply heavily that religion brings people closer to nature whereas Science wants only to “master and possess” nature. If a question arises in dialogue that may have an answer that would dissolve the argument, it has to immediately move away or be dismissed with “it doesn’t matter.” Finally, it must ignore any real questions, facts or concepts that might make this an actual intelligent discussion. Then this argument must be crushed into a shallow, melodramatic romance. Throw in the arrogant, politically maneuvering ‘ex’-husband, make all the characters accept things which are utterly ridiculous as “perfectly logical,” and constantly point out that children are being forced to give up childish thinking as though this was a modern ‘scientific’ idea.

Now usually ‘Science vs Non-Science’ is referring to the math/science vs. art/philosophy sides of human understanding, but this novel makes science and non-science into their own strange religion-like groups. This displays the all too common fallacy that science is a belief system. Being a scientist is not like being a member of a religion, or minority group, regardless of how desperately some may wish to persecute people in all its varied fields. Science cries for the protection and preservation of nature. Between 72- 84 % of surveyed scientists say that the government “rarely to never” listens to scientific guidelines regarding land use regulation. Without science there would be no “adolescence” and 11-13 year olds would still be expected to act like adults. Science is a tool, a method. It is defined as “the intellectual and practical activity encompassing the systematic study of the structure and behavior of the physical and natural world through observation and experiment” or “knowledge about or study of the natural world based on facts learned through experiments and observation.” Scientists aren’t brainwashed believers, nor are they heartless robots. Being a scientist is much like being a mechanic; one learns how to see things through specialized training in order to build what they need to build to the best of their ability. Much like a wrench is not evil, nor to blame for the violence of the tank it was used to build, science should not be unequivocally blamed for what mankind does with it. As soon as humans realized salting fields made crops no longer grow, they salted the fields of their enemies. Why blame the person who realized the properties of salt? Should then the salt be to blame as well? Does understanding the workings of a thing necessitate that it is less wonderful, less beautiful? Then how does the musician or artist, experts in the minutiae of their fields, feel about their work?

If Vigoda wants to bring about a rise in the reverence of nature he should argue against greed, commercialism, hatred and, most desperately, the millennia-old multi-religious belief that mankind has the right to dominate and misuse nature as it sees fit. That essay, if it were researched in a balanced and thorough manner, would be worth reading as he has a generally solid ability to use and manipulate words, much better shown when he speaks directly to the reader after the end of the novel (though here he claims not to blame science). Also if Re-enchanting Nature had been a straight fiction novel it may have been more worth reading as Vigoda describes environments, activities, moods and attitudes rather well. Unfortunately this novel, as it stands, is a bit too much of a dramatic, narrow minded mess.