Saladin: The Sultan Who Vanquished the Crusaders and Built an Islamic Empire by John Man 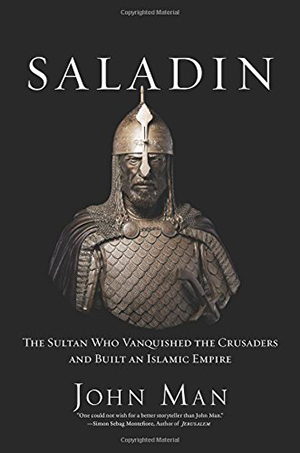 This new biography by John Man sums up the life of the eponymous hero. It traces the rise of the Sultan from his little-documented childhood in the modern Middle East, through his first major command in Egypt, and finally, to his best-known role as the man who kicked the Christians out of Jerusalem.

There has recently been a fad for biographies of notorious, but little-documented historical figures. John Man’s Saladin is part of this trend. The opening chapter on the youth of Saladin spends far more time envisioning and evoking the world of the late Medieval Middle East. The atmosphere, religious conflicts, and political movements are far better documented, unfortunately, than the childhood of a son of a relatively minor official. This kind of limitation continues throughout the book. In the period before Saladin’s decisive victory at the battle of Hattin, there is a whole chapter called the “Build up to Showdown” in which nothing much happens. The author does a good job presenting different versions of the historical record, and does provide some amount refereeing between different records. The reality of the situation is that the events of the book took place nearly 1000 years ago, and even where written records existed they have largely been lost to time. This is by far the most significant drawback to this book.

On the other hand, John Man shows a journalist’s gift for context, particularly in the last chapter of the book, which deals with the legacy of Saladin. This chapter summarizes the Sultan’s importance to the Muslim world, with clear explanations of why his star has risen and fallen throughout history, even in the Muslim world. He also pays close attention to the way Saladin was perceived and even co-opted by the western world, a narrative thread that will likely be particularly interesting to the English-speaking (and presumably largely western) audience of this book. Overall this book receives a strong recommendation for readers who are interested in history, and particularly for those who are interested in the historical conflict between the Western and Middle Eastern worlds. The shortcomings of the book are largely a function of time, rather than craft, and the author freely admits to them, rather than trying to pass a flimsily supported fiction off as the real, historical truth.