The Alaskan Laundry by Brendan Jones 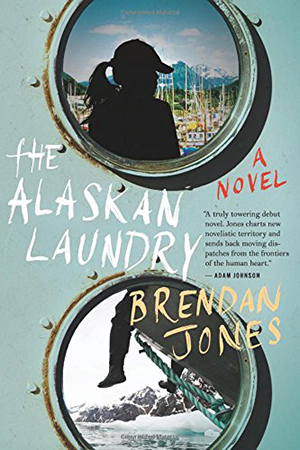 In every way, The Alaskan Laundry reads like real life in coastal Alaska ‒ the shrill cry of seagulls riding on the wind over the beach; the smell of fish rot and sea kelp on green waters; a light breeze brushing through the forest hemlocks; the silence of a soft, light winter snow; sharp curses of a dock worker pulling on a tight hawser; the creak of wooden boats rocking and scraping gently against the dockside; the stink of salmon and halibut in the hold, the bowels of the boat; the gentle coaxing of last night’s embers into this morning’s fire in a cabin stove; the dark aroma of hot coffee in a steel mug….

…As well as a storm at sea. Brendan Jones’ writing has brought strong memories flooding back at me from the Alaskan storms that I experienced in my youth. Through the eyes of the book’s main character, he writes: “Outside, green water washed over the deck, flooded the scuppers. Just half an hour ago she had been fishing ‒ now, off the port side, a wave, streaked with foam, reared back, drops skittering down the face. She was dreaming, she would wake any minute ‒ but then the wave came down with a clap, the leading edge exploding over the gunwales. She grasped the handles of the hatch cover as the boar took a heavy roll, saltwater stinging her cheeks…”

The story takes place mostly in and around Port Anna (reminiscent of Sitka, Alaska, complete with an historic Russian Orthodox church and the volcano across the bay). It’s all about a young and enterprising gal from Philly (Philadelphia) who has come north to the Alaskan frontier like so many other young people to find herself by working her way up through the ranks of the coastal fisheries.

Her name is Tara Marconi, daughter of an Italian baker, from whom she is uncomfortably estranged. She is also the girlfriend of an aspiring young actor named Conner, whom she leaves behind when she strikes out for the North. Back in Philly, as a child, she took up boxing, and now, in the rough and tumble of a raucous male-dominated fishing town, she quickly comes to be respected as someone with smarts as well as an unquestioned ability to take care of herself. More than once she punches her way out of trouble, rapidly earning a reputation for being both strong and independent.

We see her first as the greenhorn, a cheechako, fresh off the coastal ferry, starting work in a fish hatchery. We watch, through her eyes, as she graduates to work in a fish processing plant, then out in fishing boats on the wild southeast Alaskan coastal waters. For a short while she even goes to the Bering Sea to work alongside a crew of rather crude young guys on a testosterone-led crab boat (whose taunts she deals with effectively). Along the way we meet some other very real, tough-skinned, down-to-earth folks whose lives, like hers, are focused on fishing and sometimes hunting in the forest.

Tara’s goal, one of several to which she aspires, is to buy a tugboat named Chief that’s for sale in Port Anna harbor. It’s costly, so she works hard to save enough to afford it someday. She wants it to be her place to call ‘home.’ Along the way, she picks up a big dog, Keta, to keep her company, and she wonders if Conner would fit into the Port Anna seaside lifestyle. She writes frequently to him, and she occasionally talks by phone, with discomfort, to her widowed father back home. Both of these men in her life are part of her tendentious backstory.

Well into the story, she wonders if she’s strong enough to stick it out. “Maybe people who made it in Alaska were just built of tougher stuff,” she thinks. “Some Nordic ancestry better suited to the cold and wet and scream of machinery. Philly hadn’t prepared her for this.”

When the going gets especially tough, a friend tells her “we’re all tumbling around in the Alaskan laundry out here. If you do it right you get all that dirt washed out, then turn around and start making peace with the other shit. Maybe even make a few friends along the way.”

Considering that, and how other women have made it, she concludes that “Tending bar, slinging coffee, or gaffing fish, women in Alaska carried themselves differently from women down south. As if each one of them had passed through a ring of fire before coming out the other side, flame-tested and hardened. The slag of the past burned off, cooling, in the salt air, charting their own course.”

It’s a powerful, personal story, one that a publisher’s blurb describes as “A beautiful evocation of a place that can’t help but change us and a testament to the unshakable lure of home… an unforgettable story of one woman’s journey from isolation back to the possibility of love.”

Brendan Jones is a writer whose own backstory informs his evocative story-telling. He comes across as someone you may want to meet, for given his own intriguing life he surely has more stories to tell. Brendan lives and writes in Sitka and works in commercial fishing. He has earned a B.A. and M.A. from Oxford University, and has had a Stegner Fellowship in the creative writing program of Stanford University. And, like his fictitious Tara, he has also trained as a boxer. So, you’ll open this novel with the confidence that he knows what he’s writing about, and how, clear down to the dog in the picture of him (on the inside back cover) standing in front of the tugboat that he, himself, calls ‘home’. This is Brendan Jones’ first novel, and it’s a good one.

The Alaskan Laundry is a powerful book, one quite likely to vie with the best American novels of the year.