The Castaway’s War: One Man’s Battle against Imperial Japan by Stephen Harding 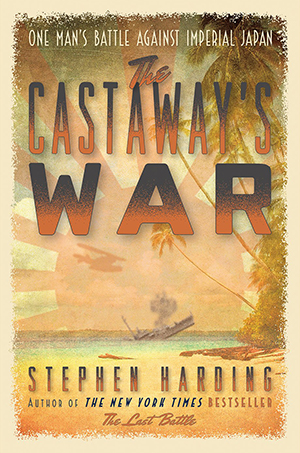 Hugh Miller, a 5’7″ lieutenant in the U.S. Navy, was manning his position on the destroyer USS Strong during a bombardment of Japanese forces in the Solomon Islands when a torpedo struck the ship, ultimately sinking it and sending Miller into the sea. It was the beginning of a six long weeks of an agonizing and frightening struggle for survival after sustaining injury. Helping others, protecting others, and engaging the enemy in the jungle, he managed with only limited supplies and his skills learned growing up in Mississippi. Lt. Miller’s story is told in this book heavily using primary sources from official documents, interviews, and memoirs as well as secondary sources. The story provides the background of his life, the war, the equipment and other personnel, as well as very detailed recounting of this occurrence in World War II, which was well known during and after the war.

The story is well told with a structure that allows easy understanding of the events leading to the episode as well as what followed. It allows one to appreciate what Lt. Miller experienced and how he sustained himself. For the purpose of this review the book received was an uncorrected proof with none of the 16 pages of black and white photographs inserted. There are 5 drawings; one of the destroyer and 4 maps. A problem experienced by this reviewer was the extensive detailed descriptions of equipment, ship, and personal passage in the region with poor relationship to the provided drawings. It was very difficult at times to understand and required resorting to Google to clarify which island or passage was being used. Otherwise this was an interesting and engaging presentation.