The Devil You Know: The Surprising Link Between Conservative Christianity and Crime by Elicka Peterson Sparks 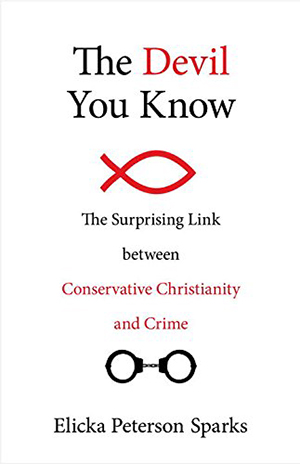 The Devil You Know: The Surprising Link between Conservative Christianity and Crime, is a book by Associate Professor Elicka Peterson Sparks of the Department of Government and Justice Studies, at the Appalachian State University. Both the title and the book are provocative and disturbing, as it was the apparent intention of the author.

The decision to chose this book for review was predicated on curiosity; inquisitiveness about the subject, examining a suggested relationship of crime to Christian belief and seeing if a rigorous review of any objective data supporting such an assertion by an academician is presented. This book unfortunately appears to represent little more than a personal manifesto; a proclamation or perhaps more accurately a presentation and argument for a theory of a possible association between the two entities.

There are six chapters comprising 173 pages followed by Notes on 47 pages and a final 81 pages of Bibliography. The six chapter headings are as follows:

1. When Did Christians Get So Mean (Again)?

2. Jesus Loves You, but We’re His Favorites

3. Why Pick on Christian Nationalists

4. A Theory of Violent Religiosity

6. The Lion or the Lamb – The Future of Crime and Justice in America

In these six chapters the author puts forward an assertion (the theory?) “…fundamentalist Christian ideology is criminogenic…” and how a form of belief identified as “Christian nationalism” results in “…promotion of violent crimes…terrorism against those of different faiths, and even crimes against the environment.” No definition of “Christian nationalism” is provided although it is “…also called dominionism or Christian reconstructionism,” which may serve as clarification?

The following chapters serve as justification and explanation for the perceived need for this area of study in the field of criminology. Cited are historical, cultural, and statistical arguments to consider this nation as developing into a Christian nation with persistent significant influence of Christianity. The proposition is made that within this form of Christianity three mechanisms are criminogenic: a theology of violence; insulation from fear of death; processes dealing with crime established from the belief system. Some 40 pages are spent recounting passages from the bible to demonstrate the violent theology. Finally a set of “Ten Suggestions For Combating Religious Violence in the United States” is offered.

While this author has spent 4 years researching for and writing this book, readers will find there is little confluence between the book and the “…surprising link.” Throughout this book there is personalization by the author with an inordinate use of the pronouns I, me, my, us, our, and we. A significant amount of personal judgment is present in the arguments, some readily acknowledged. Many times assertions are made without documentation or the documentation is scattered nearby. Sources are sometimes secondary as in a reference to a review of an article. It was disappointing to see what was hoped for as a serious book on a subject of research with insightful analysis and supporting data turns out to be more of a suggestion for further research with significant personal assertions, opinions, and judgments. As significant examples of research on similar difficult subjects which would be a better use of ones time are the following: More Guns Less Crime by John R. Lott, Jr., Future Crimes; Inside the Digital Underground and the Battle for Our Connected World by Marc Goodman, A Deadly Wandering by Matt Richtel, American Gospel by Jon Meacham, and God and Government by Rev. Barry W. Lynn.