The Horrible Void Between the Trenches by Dr. Clifton Wilcox 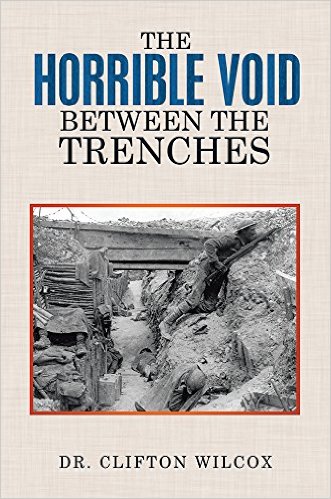 The Horrible Void Between the Trenches, by Dr. Clifton Wilcox, amounts to an academic thesis regarding the soldiers in the trenches during World War I. He draws on several different disciplines such as philosophy, cultural theory, history, and psychology. He draws from many works and disciplines in order to make his arguments. His work is based on the years 1914-1918, concerned with the Western Front, the trenches, and how the soldiers who occupied the trenches lived within their very chaotic and violent world. He briefly examines the technological advancements that made WWI what it was and analyzes how these technologies occupied the space around them and how this affected the soldiers. Through the analysis of the soldiers’ newspapers, diaries, songs, and letters home, he is able to state that to be a soldier was to be subversive. Soldiers, by the mere act of trying to survive were subverting the violence of the war, often even making life-saving devices out of the violent articles of war like gun cartridges and shell casings.

At only ninety-nine pages, this book is dense. Wilcox crams a lot into very little space, and his language reflects this. His sentences are often detrimentally dense, needing a lot of unpacking. In a couple of places, it even seems that he loses sense of grammar as the complexity of a sentence gets out of control. This is not to say that he does not have some valuable things to add to the historical analysis of WWI. He adds depth to the current archetype of the Western Front soldier. He forces us to look deeper, past the soldiers’ typical depiction as victims of a war machine driven by large, unwieldy machinations of nations. He points out that the current retrospectives have limitations, and soldiers, while victims, also lived in the trenches, transforming them when they could from chaos to a semblance of stability.

It feels like Wilcox gets dragged down in his analysis. While reading the beginning and the middle, it is often hard to keep his main points in mind. It isn’t until very near the end that he begins to pull things together. Any reader would benefit from reading the end first, to truly get a sense of Wilcox’s argument. Otherwise the reader is apt to spend too much time asking themselves why the middle passage is present at all. Wilcox spends much of the middle looking at the language the soldiers used in their writings, with particular attention to their description of the war as hell. This is an integral part of his argument, but it takes reading his conclusions at the end to understand its significance.

Wilcox certainly has an impressive vocabulary, and every now and then there are flashes of beautiful rhetoric in his writing. That said, this is not a book for the layman, or even the WWI enthusiast. This is a work that any professor would love to assign, if only to hear their students grumble. The blurb on the back of his book hardly gives a sense of what is inside, as he barely references the ideas mentioned there within the book itself. With a little rearranging, some editing, and unpacking of some of the language, this would be a much more accessible work. It certainly has merit; unfortunately it just needs to be unpacked.