The Secrets of Drearcliff Grange School by Kim Newman 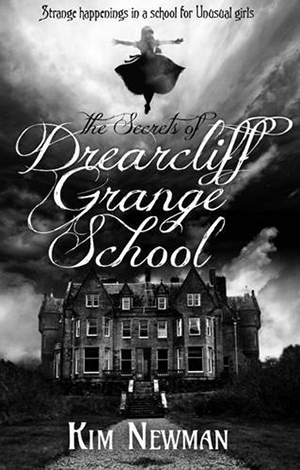 Amy Thomsett knew she was different after she began floating at inconvenient times. Shipped off to Drearcliff Grange, a school for “troublesome” girls, Amy finds herself living among other Unusuals – girls with special abilities – as well as those who come from interesting backgrounds. Despite the strict rules and gloomy environment, Amy finally feels like she belongs. Amy’s new friend, Kali, is abducted by a group of hooded figures and she learns that the kidnappers may have had inside help. In order to fight back Amy sets up her own secret group, the Moth Club. However, the kidnapping may just be the beginning of a much more sinister plot brewing within the walls of Drearcliff Grange.

The Secrets of Drearcliff Grange School is a dark fantasy aimed at the YA audience, and its setting – a British boarding school – is a familiar one for longtime fans of the genre. It may feel a bit too overly familiar in the beginning, what with the school sorted into different houses and each one having their own aspect, but the characters and the layered mystery surrounding the story is enough to keep most readers flipping the pages. The book touches on bullying, although this bullying appears to be a form of sanctioned hazing, and while magical revenge isn’t necessarily in the cards for most of us it sure is satisfying to read. There is also quite a bit of a cast mentality, particularly between the Unusuals and the “regular” students. The main positive lesson that the book pushes is how people can learn to work together and that teamwork can often make an impossible seeming task possible. However, that doesn’t make the entrenched bullying and caste culture magically disappear, even if you happen to be Unusual.

A mildly creepy fantasy romp that has a few head-scratching moments, The Secrets of Drearcliff Grange School is a fun read, and proof that YA books don’t always need to be a trilogy.