The Underwater Typewriter by Marc Zegans 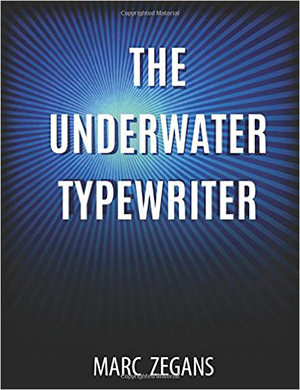 “Your whiskers are grey, you must have stories”

So “she” says in the title poem of The Underwater Typewriter. “She” mind you is never named. You will find that common in Marc Zegan’s collection. This is an emotional distance not too uncommon in poetry, here in Zegan’s The Underwater Typewriter though, it creates a little too much distance (although there are some favorable results). There’s some mystery here as we are taken through images of ancient ships, blood seas, and ebbing tides – but aside from the title poem (which is in fact one of the best in the collection) there’s a bit too much ambiguity. Between some good poems, and nearly great ones there are some stories altogether lost in a sea of overdone language.

Poetry is of course never about answers. Or really even the search for answers. The truth should be in the language and the feeling conveyed; if we’re inspired by a poem, if we like it, that is often what should come before meaning. I had to ask myself after reading each poem in The Underwater Typewriter, did I like it? The answer for some was yes, there’s more good poetry than bad, but more often than not I felt impartial.

Consider the opening poem, “Clouding,” where we’re given the line “Her eyes, turbulent as milk…” This opening line falls flat because we’re given an abstract concept such as turbulence, which although can take on physical attributes (rumbling, shaking, breaking) but what it is compared to (milk) possesses none of those qualities. As readers we’re left wondering what that means. It’s incomprehensible. It’s not a lack of creativity but the line like many other openers doesn’t make us think and even worse it leaves us like many of the poems do – without an objective feeling. “Clouding” goes on with some stronger lines like, “hope against truth quivers her copper irises” but like many poems that follow doesn’t give us much to hold on to.

Many lines, such as the ones mentioned, and more specifically opening ones are symbolically a mismatch – not for creative purposes but out of the inability to effectively create any symbolism or real imagery. Take “Suspension” for example. It’s not a bad poem; it’s language is artful enough with lines like “as you gave time back its course, gold in azure.” But the comparison is gold to blue, two descriptive adverbs and it feels like a wash. A muddling of colors that misses what Zegans may be going for comparing two colors within another when it is stronger to compare a color with something concrete we can feel or smell.

Zegan does have his strong moments though with poems like “Salt,” where his language steps up but we’re still not quite given the realism or depth to hold on to. Lines like “I hauled from blooded sea” stand out, and Zegans delivers a nice poem here, if not still mired in the same problems of a vague delivery. As he gets into things with “P(un)K Poets: Too Fucked to Drink” his language excels and his form changes but the whole of the poem is a bit too clunky. He gets out there in some cases with poems like “Woodshed,” which over four pages looks as if the words were strategically dropped on the page. The form works, and like the similar poems “Broken Lines” and “Chutes Chaudiers: Ashuapmushan, stand out as well done, rhythmic poems in a vast and messy collection.

But going in the opposite direction works more in Zegans favor. I like some of his shorter poems best. “Gittel,” “The Poet’s Chair,” and “Laundry and Grief” all work due to their succinctness. They don’t wait to become anything; rather they are short affairs, which work due to their brevity and short flow. They don’t have lines that stand out for the wrong reasons like the previous mentioned “Clouding” or “Suspension,” but rather with poems like “Gittel,” work due to their simplicity in both language and meaning. We can find hope and feeling in all of them. Even poems like “Becoming” (a well written and sensual poem about cutting an apple) stand out due to it’s language and it’s simplicity.

Interestingly enough I am reminded of John Berryman’s Dream Songs in which he also takes reality and brings us into a surreal, dream form of poetry. But even then Berryman, who aside from being a rhythmic master, still gave us lines that were accompanied by hard tangible things, and concepts we could find meaning in. In his “Dream Song 14” for instance he says “Life, friends, is boring. We must not say so. / After all, the sky flashes, the great sea yearns, / we ourselves flash and yearn.” That abstract feeling of yearning, given to the sea as a quality and then to humans, gives us a place in the poem. It is a larger than life proclamation said simply and brilliantly. Zegans has the dream part down; his form and his language are at times superb. But with The Underwater Typewriter, as a whole, it feels too much like we’re lost at the sea. We’re never given a clear, relatable feeling we also can yearn for. A clear line as to our purpose as the reader would have gone a long way in a promising but average collection.