A New Oracle of Kabbalah by Richard Seidman 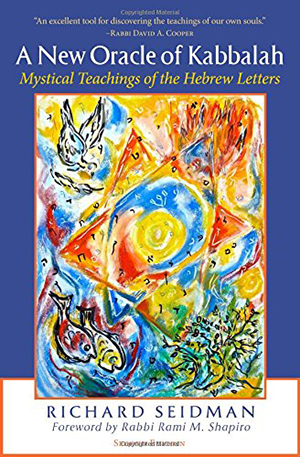 There are many divination tools available to any seeker of assistance or direction. Tarot decks are one of the oldest forms. Another are the Kabbalistic interpretations of the Hebrew letters. A New Oracle of Kabbalah: Mystical Teachings of the Hebrew Letters, by Richard Seidman, focuses on that latter divination tool. Seidman refers to himself as having a “beginner’s mind” when it comes to Kabbalah, even though his first edition of this book was published in 2001 and he has been working with this oracular system for more than thirty years. In the intervening years many other practices, along with his lived experiences of loss and growth as he ages, have illuminated his thinking as well.

The Hebrew Aleph Beit consists of twenty-two letters. Each letter has a numerical value and a core meaning or set of meanings. These meanings are not precise definitions, but more of a sensation or sensory value for the letter. Seidman brings to his writing and his interpretations, the richness of his background in not only Judaism, but also a variety of other belief systems and practices.

The format of the book makes it easy to use as a reference for divining meaning from a deck of Hebrew letter cards. It even contains directions and a web-reference for making the cards oneself. It can also be read to discover the richness of the Aleph Beit as well as the beginning of defining an aspect of the Kabbalah. For a well-written, understandable introduction to either of these things, A New Oracle of Kabbalah is a great place to start.