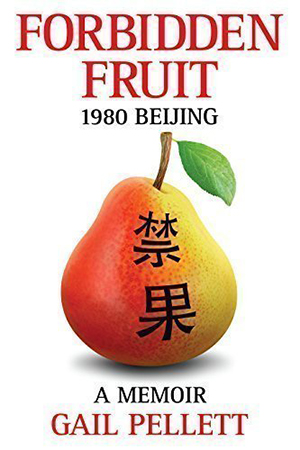 Gail Pellett’s new book Forbidden Fruit – 1980 Beijing, a Memoir is a captivating read and an window into a time and place that few people were privileged to explore. Gail had been offered an opportunity to fly to Beijing for a two-year contract position to work as a “foreign expert” with Radio Beijing. While her purpose was supposed to be to teach her Chinese colleagues how to approach journalism from a western viewpoint (what non-Chinese listeners may find interesting and want to know about China), she was sequestered from her Chinese peers, and was treated with distrust and suspicion. This memoir describes her struggles during her term with Radio Beijing and how that experience shaped the rest of her life.

“December Dream:
I am working on a jigsaw puzzle. It turns out to be about China. I am working on it for a year only to discover that half the pieces are missing.”

Memoirs are often tricky things to write, as readers will often feel that the author either shared too much, or not enough. Memoirs of events that happened over 30 years ago can be even trickier since memories tend to fade and distort with time. Gail Pellett managed to tackle these issues in a confident manner due to her extensive note taking, and journal and letter writing habits that she sustained while in China. Her journalistic training also helps keep this memoir from being oversaturated in self-reflection by going into the complicated and ample history of China as it related to the chapter’s main theme, story, or discussion.

There is, however, quite a bit of Chinese history, and some readers may find themselves feeling a bit overwhelmed. The book does include a basic timeline inside the front cover of major Chinese events, starting with the First Opium War in 1839 to help readers keep track of the time periods Gail discusses. There is also a Bibliography in the back of the book that lists the various books and music she refers to throughout the story, as well as several maps of Beijing and China on the inside back cover and cover flap. However, the book may also have benefited from a cast of characters, as there were many friends, acquaintances, and coworkers that were easy to confuse, particularly if the book is read over several sittings.

“To my students at Rutgers University, I harped away about the myth of neutrality. The very stories we chose to report or that the editors and executive producers approved or assigned, the people we chose to interview, the questions we asked, the facts or information we included, what we left out, the vocabulary we mobilized – all led to favoring some facts and perspectives over others. And if we included conflict, there was an assumption that there were only two positions rather than multiple perspectives on any event or policy. And furthermore, the pressures to create a narrative or force a story arc might imply an ending or resolution where there is none.”

The book resonates with Gail’s sense of loneliness, isolation, and the frustration that she experienced with herself, the people, and the politics of which she was caught in the middle. While the book is a memoir, it is also a book on Chinese history, a study of personal vs. public identity, and an exploration of human connections. The book evokes a similar “fish out of water” sense that will be familiar to those who have seen the film Lost in Translation, but will be of particular interest to those readers curious about Chinese history. Forbidden Fruit – 1980 Beijing, a Memoir is well worth the time it takes to read, and is likely to inspire plenty of thought and discussion.