From Stray Dog to World War I Hero: The Paris Terrier Who Joined the First Division by Grant Hayter-Menzies 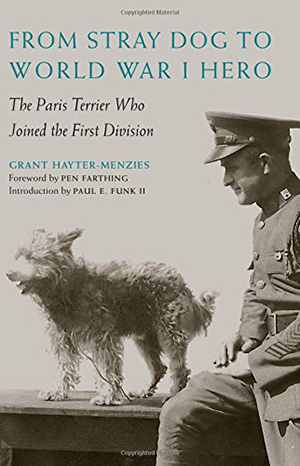 This is one fine read ‒ well researched, well written and… well, it’s inspiring! Other reviewers call it “vivid, riveting, brilliant, charming,” and “irresistible.” In short, it’s a great read, a combination of canine memoir and history.

‘Rags’ was a scruffy terrier-mix adopted by two soldiers fighting on the Western Front of World War I, in the First Division of the American Expeditionary Force. He started out in life as a street dog who lived on Montmartre, in Paris, but after he was found in July 1918 he joined Sgts. Jimmy Donovan and George Hickman, and others, in the crucial battle of Soissons, at Saint-Mihiel, and “in the blood-and-mud bath of Meuse-Argonne” as the author, Grant Hayter-Menzies, describes it. And that’s where the lovable mutt became a canine ‘war hero.’

His was a relatively short period of fighting, near the end of the war, but he showed himself a real hero nonetheless. Right off, Rags demonstrated an uncanny ability to alert his soldier comrades of incoming shells. He also learned to run messages across the battlefield. He also helped locate broken signal corps communication wires. Paraphrasing the soldiers who knew him well, the book’s author writes that “Rags… proved of what durable stuff one little dog is made.” He was described later as “a long, yellow-haired mut[t] with one ear which falls over his blind eye [described as “sky-blue”] and a tail that stands on high when he is out on the parade ground. He is slow-moving. On cold days, he coughs an ominous cough. He sneezes and wheezes from asthma. He has glorious memories.” It was also said that as a Parisian born dog, he had a natural love of good French ice cream. His cough probably came from exposure to mustard gas.

As the author points out, taking dogs into battle exposes them to remarkable opportunities and challenges, and to the potential for tragedy. Rags experienced it all.

Throughout his months on the war front Rags was devoted to Sgt. Donovan. They lay together in the trenches and shell holes, they ducked the enemy’s bullets, and they were both wounded near the forest of the Argonne. Donovan was seriously gassed, and Rags lost the sight in one eye, was hit with shrapnel, and he suffered, less seriously than Donovan, from mustard gas poisoning. Ultimately, they shared the same stretcher off the battlefield, and hospitals and medivac trains to the coast, and the troop ship that took them to America to recover. The dog had become so well known for his feats of daring that someone in headquarters ordered medics and hospital staff to treat Rags and Donovan as a unit, of equal importance. When they reached the hospital ship that was to take them across the Atlantic to America, however, Rags had to be smuggled aboard (with the connivance of friends) and was sent all the way to the states to be by his master’s side until, eventually, Donovan died of his wounds. Along the way, “each time Rags was on the point of being ejected from Donovan’s bed, someone who knew about him stepped in to straighten things out. In fact, Rags’s story had begun to take on a life of its own…” He soon came to be known and held in the consciousness and memories of many who had not known him in battle, nor had fought alongside him on the war front. American journalists who heard about him wrote of Rags and his fame in newspaper stories.

Sometime after Donovan died, Rags was adopted by an American officer’s family, and lived on several military bases, until he, too, passed at the age of twenty, old for a dog.

The core of the story is his fame in the fighting in Europe, but the author continues the dog’s story over the eighteen years he lived in America, describing various escapades and trouble Rags got into, and, ultimately, the public recognition that he deserved.

It’s a charming story, one that compares Rags’s wartime experience against the fame of other notable war dogs. Rags’s post-war life was charmed, including special dog show debuts.

All in all, the author sums it up best: “For Jimmy Donovan, Rags was at first a battlefield buddy and later an equal partner in the trenches without whom Donovan could not have done his job as soldier or survived mentally and emotionally ‒ the equivalent of a modern therapy dog. For Major Hardenbergh and his family Rags was a lovable companion who needed a home and who happened to have a glowing war record, of which all were justifiably proud and which their descendants venerate to this day. For others, Rags was and is a symbol of the First Division at its finest, a source of pride that grew in luster with each of his real or imagined acts of bravery….”