Goldilocks and the Three Polar Bears by Ross Murray 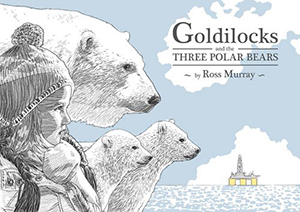 Goldilocks in this story is an oil rig, the three bears are polar bears that live on the ice near the oil rig, and the main character is a little girl whose father flies men out to the rig in a helicopter. Sometimes he takes the little girl with him and she gets to see the polar bears, which are her favorite animals. She even dreams about them. But then an oil spill happens and she worries about the bears. She worries about the bears as the oil burns for two weeks in the water. She worries as chemicals are added to the water to try and clean up the oil.

It is obvious that this book has nothing to do with the traditional narrative of Goldilocks and the Three Bears. The author felt compelled to write the book after witnessing firsthand the destructiveness of an oil spill—his motives are understandable and commendable. The illustrations are pretty, but the story has a sad ending, which in itself is not a bad thing, but the writing is rather heavy handed with the little girl never seeing the bears again, her father losing his job, and the family being forced to move. The author misses out on a teachable moment, as a sad ending without offering a resolution or a moral is simply demoralizing and leaves the reader with a doomsday mentality, rather than inspiring the reader to do something about environmental disasters. The book ends up feeling like a slap in the face, rather than an educational material for children. Proceeds go to support Green Peace—this should probably be stated on the front cover.