Journey to Munich: A Maisie Dobbs Novel by Jacqueline Winspear 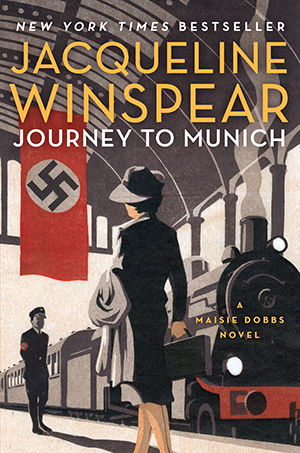 Journey to Munich is a heart-pounding adventure story in the Maisie Dobbs series, which takes place in 1938. Maisie is in England, recovering from the loss of her husband and trying to move forward in her life. Having spent the last month in the home of her long time friend, she sets out to take a quiet walk around the town. Upon entering Fitzroy Square, she runs into two members of the Secret Service, of whom she is acquainted. As a former female investigator, they are requesting her help once again.

There is great urgency with this assignment. The German government is willing to release a British citizen from prison, but only to his daughter. The man is important to the British government. His daughter is ill and unable to travel. This assignment involves Maisie going undercover in the guise of this man’s daughter. They need her to go to Dachau to receive him and bring him home quickly. Being an investigator has given Maisie many unique experiences that may help her along the way. She will face the dread and gloom of the city of Munich with purpose, but will she succeed in her quest?

Jacqueline Winspear has added another captivating novel to her Maisie Dobbs series, Journey to Munich. The Maisie Dobbs character is smart and courageous – a strong, feminine hero. Despite being neck deep in Nazi territory Maisie carried herself with great confidence and poise. The novel flowed easily and was not cumbersome to read. The book functions as a stand-alone title and can be read and enjoyed by itself without having to read any other book from the series. The setting in the story of pre-war Nazi Germany was believable; the reader can easily feel the gloom and despair of the city of Munich as Maisie walks around. Winspear’s depiction of Dachau made the oppressive nature of the place tangible, and her descriptions went as far as depicting the nuances on the various uniforms and the demeanor of the soldiers themselves. Long-time Maisie Dobbs fans will not be disappointed!