On Love by Charles Bukowski 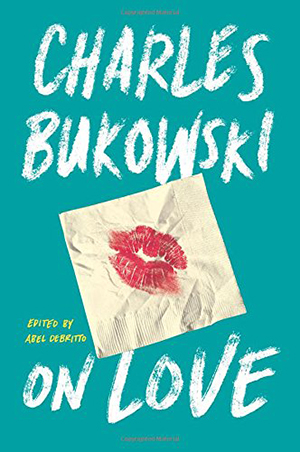 “Don’t try,” Charles Bukowski once said when asked about the creative process. Here he tells other writers if it doesn’t burst out of you, simply don’t do it. Don’t try. He went on to elaborate the phrase further to fellow writer John William Corrington in a 1963 letter, “It’s like a bug high on the wall. You wait for it to come to you. When it gets close enough you reach out, slap out and kill it. Or if you like its looks you make a pet out of it.” Bukowski, as we find, had many pets from 1963 up until his death in 1994. His poems are real life depictions of one night stands, days at the racetrack, the art of writing, and being old and full of desire but never finding love – other than perhaps through his daughter. In his latest collection, On Love, all of his love poems from as early as 1957 to as late as 1993 are put into one book for the first time.

Bukowski was famously referred to as a “laureate of American low-life” in 1986 by TIME magazine. What we’re reading in his work – especially in his latest collection, On Love – is experiencing intimacy in its most candid form. On one hand, Bukwoski has the insight of a poet, but unlike Auden, or Whitman before him, he was more interested in the honesty of the confessional verse – no matter how decadent. His life, as seen through On Love, is a depiction of a brash Americana, full of drinking, small bedrooms, and fragmented moments. The mundane is brought to life through poems like “Sleeping Woman,” as well as through Bukowski’s own uncompromising nature; a mind and a soul that found the passion in these moments. In the honesty of his confessions we may find him a low-life, but a soulful and brilliant one nonetheless. See “Poem For My Daughter,” where after becoming a father he answers the question, “are you still gonna drink?” with a flat “yes.” There is no flinching here. It’s an uncompromised statement that he plans on being the same person he was always was.

If the honesty of Bukowski is beer, women, and sleeping, it is also loss, physical desire, and the rejection of love despite the heart’s drive for it. Despite the things that in the end will kill us, we need them because they make life worth living in the first place. It is drinking and smoking but is also life and it is passion as he continues in “Poem For My Daughter” by saying “she’s got a chance…” a reference to appreciating Beethoven, Jellyroll Morton, and bargain dresses. He finishes with the following:

“Maybe one day she will
bury me

That would be very nice
If it weren’t a
responsibility.”

This leaves us with a double meaning – on one hand to have no connection to a man who drinks and smokes too much and thus never know him enough to bury him, and the second to be free of responsibility by living and not worrying too much about having to bury her own father one day.

In his writing, Bukowski approaches what other writers and artists often miss. Bukowski isn’t trying to win us over with anything. He didn’t sit down at the typewriter with a goal. He sat there because he was mad, and his soul had a lot to say. The difference between Bukowski and other writers is he knew how to listen to his soul and wasn’t interested in censoring it.

Consider “I can hear the sound of human lives being ripped to pieces.” Here, like his rebuke on the creative process, Bukowski answers a woman who he is sleeping with and who isn’t interested wasting the day away:

Bukowski is more interested in sleeping than getting up at that moment. The unknown female gets up and goes to the typewriter. “I don’t know why people think effort and energy / have anything to do with / creation.” he goes on to write, before giving us the final line, which is a candid, snarky turn, where Bukowski is again doing what comes from the soul, “I turn on my belly and fall asleep with my / ass to the ceiling.”

The irony is that this is a poem. While the female goes to write, Bukowski finds the poem in not trying. It’s a bit of him getting at those who try too hard to be creative but, more importantly, it is his own way of expressing the creative process – a figurative turning over and not thinking about it too much. The poem is in its most literal meaning Bukowski not trying. Although in some sense the act of writing itself is in a way an effort. Bukowski through On Love is telling us the poetry is not in trying, it’s in living. Consider the obscenely raw “How To Be A Great Writer,” which displays Bukowski’s stand on creativity as he tells us, “get a large typewriter / hit that thing, hit it hard.” It’s not difficult to imagine Bukowski doing just that. But there’s also an ease here. Even when Bukowski is saying “don’t try,” he also means “don’t think” – at least not too much. “There’s still time, and if there isn’t that’s okay” he adds, the irony again being a poem written about not trying too hard to write a poem.

But, of course, in this time, Bukowski is there to sit and be creative but also give us the in between moments of his own life, and in that we find his desire, sorrow, heartbreak, humor, and raw contradictions of love.

Take, for instance, “quiet clean girls in gingham dresses.” “All i’ve ever known are whores, ex-prostitutes, / madwomen… I need a good woman / more than I need this typewriter.” Bukowski writes, “…i know that she exists /, but where is she upon this earth / as the whores keep finding me?” In this Bukowski is expressing his desire and his rejection of love. His madness and his heartbreak both of which are in direct contradiction to one another. As readers, we meet these women who keep finding Bukowski as he attracts them, but the attraction is to madness and not to security; volatile and more about hurting the other, the relationships soon breakdown. See poems like “all the love of me goes out to her (for A.M),” or the utterly brilliant “my real love In Athens,” about approaching love but coming away hurt by its elusive nature. “But what can I make of love / when we are all born / at a different time and place / and only meet / through a trick of centuries / and a chance three steps / to the left?”

It’s a beautifully succinct expression of love, and its fickle nature. Not that Bukowski doesn’t get his chances as he rejects love over and over again, writing in poems like the ultra long and beautiful “Love,” where a woman named Sally, “a sloppy leaver” leaves notes, hairpins, and photographs thrown about a tiny apartment – she represents a manic, messy attraction to Bukowski who answers her statement of “I could have loved you forever” with a solid rejection of “get fucked.” The two find each other again however near the end of the poem, piss drunk in bed, as things end with the grotesqueness that many of Bukowski’s loves become as the two take turns vomiting in the toilet.

Even the enigmatic “Love is a form of selfishness” has its genius, where Bukowski takes his usual form of simplicity and candid nature and turns on the symbolism with a manic and genius breakdown of love being something selfish and destructive. This one is about the art of words as he writes, “pither, the red fire, pither the eustachian tube!” The symbolism showing us the difference between a Bukowski who could say things simply and one who could could also go over the edge, as the poem delves into the artist discovering physical pleasure, and breaking form with lines like, “gold gold gold gold.”

But if Bukwoski ever did find any true form of love it would be in the poems written for his daughter, in such as “For the 18 months of Marina Louise” – one of the simplest poems one will read as Bukowski takes the image of the sun and uses it over and over to describe his daughter to great effect. He uses his own image as contrast, describing himself as “an old man” who is “battle-wrecked” as he ends it with “….I become / through her / majesty / and infinite / magic / sun.” Even his “love poem to Marina,” paints a simple yet haunting picture of a Bukowski who realizes he has become a father when most men become a grandfather. The poem reads like a gift to his daughter Marina, left to read long after he is gone and she is still young.

Perhaps the great example of these contradictions and the essence of Bukowski comes to us in the exceptional poem “One For The Shoeshine Man,” a masterful poem that takes all the things that are Bukowski into one poem in perhaps his best confessional moments, giving us lines like “the miracle is in having five women in love / with you at the age of 55 /…the gift is in having a daughter more gentle / than you are…” but even in his guttural sense Bukowski found the beauty of life, giving us his most straightforward and grotesque lines in poems like “the best love poem I can write at the moment,” a spontaneous and vulgar write up of love in its purely physical sense, “but i think if people / can’t love each others assholes /….that ain’t complete love” he writes and here again we see that deep sense of desire, and frankness mixed with his ability to be honest and tell us what love is in the most candid and unappealing way possible. Through his curt language, Bukowski is not just not overstepping boundaries of poetry and the creative process but is saying things so plainly that they almost can’t be interpreted any other way, making his work both accessible and genius.

To Charles Bukowski, madness was life. There was no other way. The opposite for him would have been the death of a regular life. He had the chaos of his poetry but also sought the comfort and security of love – as we read through On Love we see how elusive it all was. Bukowski’s life seemed to only exist in one state – the lifestyle of the pill poppers, the alcoholics, the prostitutes, and artists. The other end of the spectrum where one would work a day job, one would go to work, one would live a secure life – that was never a possibility for Bukowski. It would have been death first. There seemed to be no in-between. One can think further when he says “don’t try,” and realize it really means “do.” Live life and write about it, and try not to be too boring. Bukowski lived in his poetry and it’s depicted exceptionally in this collection.