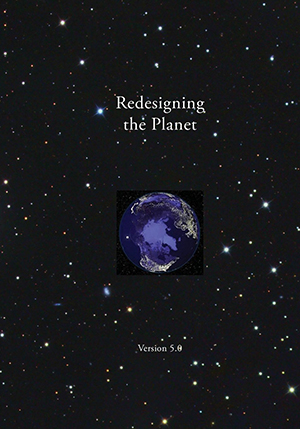 This book is a multiple author thought experiment filled with grand designs and intriguing concepts that may help nudge this barreling train called modern life off its destructive track, if only they could be introduced to the public. Alas, while Redesigning the Planet claims to be written in hopes that anyone/everyone reads, contributes, and even implements as much of the designs within as possible, it name-drops scientists and philosophers, concepts, and paradigms without realizing that the average citizen has probably never heard of them nor has the background for comprehension. That citizen is who needs this information in order for change to truly happen.

In an effort to be comprehensive there is a great deal of information poured into this book, sometimes repetitive and alternate versions of the same information. Unfortunately this information is not consistently backed by cited studies or facts. Many things in the book, that are presented as though obvious, are complex issues that a large percentage of the American population doesn’t think about or likely even know about. Even those who do recognize these issues don’t always believe that some of the problems this book is compiled to confront are real, or are in need of confronting. While this is written for the world as a whole, and generally as a large intellectual exercise more than anything, there is an apparent lack of concern for presenting facts and research in a simple, perhaps illustrated manner (for reference see Stephen Hawking’s Brief History of Time) in order to back the concepts and designs provided in a way that can get through to the people who need them most. This is going to be a detriment to persuading the many citizens, American and otherwise, who barely listen when significant ideas ARE provided in easy, fact-first formats, much less when things are highly conceptual and dense.

Redesigning the Planet is a fascinating and valuable thought experiment, meant to confront some of the worst of the wicked problems facing the world today, but which could benefit from being not only simplified, but also refined.