The End of Bull by Jeffrey Knowles 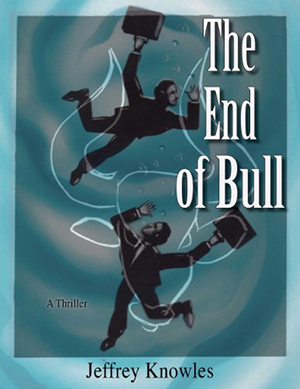 Jeffrey Knowles’ The End of Bull is a brief, but ambitious thriller about a CIA agent, Barney Trent, in the midst of a late-coming midlife crisis, on the verge of losing his much younger wife, and going rogue against drug cartels in Mexico—specifically a small cartel, Andele, that may be trying a hand at not only smuggling illicit substances into the U.S., but also smuggling would-be suicide bombers. As Trent digs deeper and deeper into the muck—and as he blows up more and more of the enemy cartel’s possessions and members—he begins to grasp at a truly nefarious connection between Andele and his best friend, the President of the United States. Amassing a growing number of enemies, including those whom he once considered friends, Trent refuses to back down, refuses to return to the States and face a nice retirement, preferring instead to keep digging towards the truth and towards the ultimate decimation of the Andele cartel. The tension and excitement build as our unlikely but endearing hero pushes forward towards his… destiny?

Throughout the course of the novel, Trent has many adventures and Knowles introduces his readers to a number of periphery characters—from fellow CIA operatives to DEA agents, corrupt and clean politicians, humble Mexican nationals who are virtually held prisoner by the cartels’ hold on their nation, the stereotypical and sleazy cartel leaders and henchmen, and, of course, a host of female characters who are seductive and alluring in the manner in which women are typically portrayed in novels of his nature. While information may seem to come too easily to Trent, and while it may occasionally be slightly less-than-clear as to why exactly he’s been allowed to practice his vigilante justice on the government’s dime as long as he has, Knowles’ writing is strong, his characters largely likeable, and the story, which is firmly rooted in the political and social climate of America today, is quick-moving and propels the reader forward. Occasional heavy-handed declarations from characters –one, a DEA agent, has fallen out of favor because he published a blog post stating that ending the war on drugs would make America safer, while another directs someone to a website that can only be meant to be that of Libertarian think tank The Cato Institute—perhaps show more of the author’s political biases than some readers might like. But even this is done in a way that doesn’t detract from the plot.

As a novel, The End of Bull doesn’t stray far from the tried-and-true thriller template, but it does not suffer from this. Self-published, it could have used a more careful edit or two, as there are (very) occasional misspelled words and missing punctuation. Still, Jeffrey Knowles has created a fun and action-packed read for fans of thrillers, governmental agency books, and novels about current events and the drug trade. It’s not for everyone, but it shouldn’t alienate anyone, either.