The Nikopol Trilogy by Enki Bilal 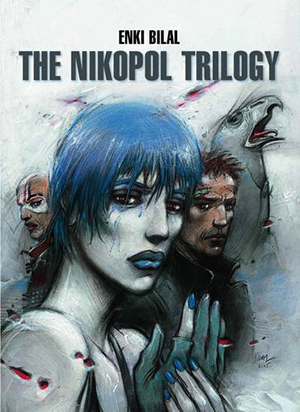 Herakles Nikopol finds himself in a very different Paris after a thirty-year exile in cryostasis. The Egyptian gods are hovering over Paris and are demanding fuel so they can leave. However, Horus has other plans and he needs Nikopol’s unwilling help to carry them out.

The art in this trilogy is quite good; however, the story was a little lacking. It was sometimes difficult to discern the motivations of some of the characters. At times, it felt like the reader was placed into the middle of a plot but it was never explained were this conflict originated. How did the world get this way? What has caused all of the mutations that are seen in those of the lower classes? How exactly does the scriptwriter work? How do all of these seemingly unrelated things come together?

While there are connections to be made, they are rather slim and don’t come together very well or very clearly. Much of the time, it felt more like a mixed bag of interesting plot points that didn’t become anything more than just a couple tantalizing panels. They would hint at something rather interesting, but never follow through with that idea. Various plot points were eventually dropped partway through and never came up again.

The physical book is well made and the art is great, but overall, it was a rather frustrating read. It had a lot of potential but parts of the story just didn’t come together in a very cohesive way, which made it difficult to follow.