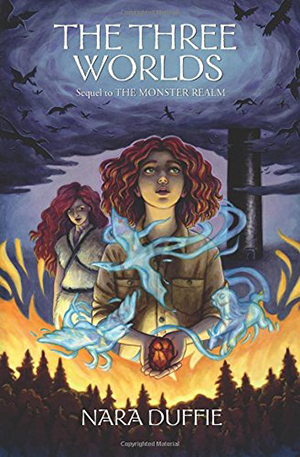 When Lillian is kidnapped back to the land of Lanodeka by elves, Katy and Maisy jump back into danger to save their best friend. However, their rescue attempt puts both worlds in danger as they have brought the second medallion with them. Lillian’s sister, Bluebell, has been busy. She’s managed to use the Creation Stone to create huge chimeras, built for one purpose: destruction. If Bluebell and the dark force behind her manage to get their hands on both medallions, they can use them to control the Creation Stone and create a new portal back to Earth, which would allow the monsters allied with Bluebell to destroy humanity. Everything comes down to three young girls and the companions they met during their first visit to Lanodeka. Will they manage to stop Bluebell in time, or will the human world fall?

The Three Worlds is a follow-up to the world created in The Monster Realm. There is a brief prologue to remind people about events in the first book, and the story takes place very soon after the characters’ first adventure. Lillian, Katy, and Maisy are incredibly believable tween characters, although this shouldn’t be surprising based on the age of the author.

Nara Duffie was just shy of turning 12 when the first book in the series was completed, and finished The Three Worlds a year later. Completing not just one, but two books at her age is a huge accomplishment on its own! The book itself is a quick read, and is perfect for the middle grade audience (children 8-12). The dialogue is simple, and the story is easy to grasp. Events happen quickly, so it’s unlikely readers will ever find themselves bored. There are, however, some larger scale problems with the book that could have been fixed to make it an even stronger adventure.

The most common issue is the repetitive nature of some of the information. For example, in the prologue on page 14 readers are told that Lillian’s family “were Stone Keepers, charged with keeping the Creation Stone safe” and that they have one of the two medallions that open the only remaining portal between worlds. On page 20, barely 6 pages later (several of which are blank) readers are reminded of this again. Then on page 23, Lillian’s mother repeats the information for a third time. While this is probably the worst instance of this happening, it is a common thread throughout the book.

There are some areas of the book that could have used some more developmental work. To start with, the scenes with the parents, whose behavior and dialogue was not terribly believable, felt out of place. What should have been a big moment in the book was the reveal of Arachne’s alternate form. Unfortunately, the foreshadowing and teasing had been far too easy to discern and ruined what could very well have been a shocking reveal. Finally, the book could have benefited from the inclusion of a Cast of Characters at the beginning of the book. There are quite a few characters that are introduced very quickly, and their descriptions are depicted in a list form as opposed to organically built into the story. As such, who the characters were and what they looked like can be easy to forget or mix up.

All said, The Three Worlds is an amazing accomplishment, and the book is enjoyable and a very solid work. Fans of the first book will love the sequel, and will be left eagerly awaiting Lillian, Kate, and Maisy’s next adventure. Nara Duffie is a huge inspiration to young writers, and will likely only improve with age and practice. I look forward to seeing what she brings to the table!