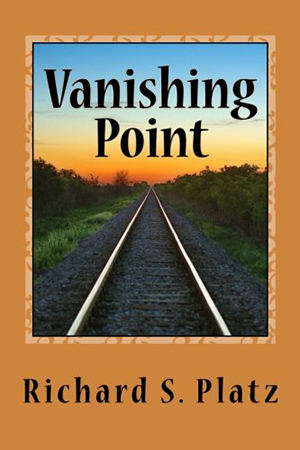 The best moments in Richard Platz’s Vanishing Point come when our characters are in their quiet moments. If there is a vanishing point for them – or end of the world – it comes through their isolation and moments of solitude that often are disrupted. There’s a fair amount of action, characters intermingle but mainly author Richard S. Platz delivers us stories of loners, anti-social beings, and those seeking to find themselves in hopeless worlds. The opening story “Man Eaten” is perhaps the best in the collection. When Ernie Ackerman goes on a solo backpacking trip to find himself, he runs into two other characters, Carla and Hero, who stop to help during a bout of increased heartbeat – although their own fates are not just unorthodox but abrupt, there’s a fair amount of tension here, especially with the story name itself. The name remains figurative, and rightly so, as Platz hits the right notes giving us subtlety over violence or unrealistic developments.

I enjoy Platz’s approach to nature here. Vanishing Point seems to possess a soft spot for solitude and those seeking to get away. Strangely enough it’s matched by an almost complete opposite lean towards machine and war, with stories like “Mrs. Wigmore’s Troops” – a Harrison Bergeron-esque story that doesn’t quite develop as nicely as some others but works well enough. Stories like “The Butler,” work better in this flavor – where a machine butler on the verge of being re-programmed proves he’s alive and finds humanity in the wife, Margaret. This antithesis by Platz is nicely done, but I rather like when he sticks to stories about nature and its interaction with people. For instance, “Barriers” is a strong story about a young poet caught near the Mexican border who though he is a US citizen is brought into custody. It costs him seeing his dying brother and perhaps of ever finding a home, as several different cultures meet and clash.

These singular moments in Vanishing Point ring true, the small moments where our characters isolated and alone seek human connection or in some cases to be far from in it. The title story “Vanishing Point” is less a story, and more a strange science fiction cautionary tale, in it there’s a highlight of truth: “My own significance seems to be the vanishing point.” It’s a truth that finds its way into every story. Most characters are on the verge of being found or lost forever. In “River,” the recently divorced young man, Bunky, goes on a white-water rafting trip on the advice of a friend – here the adventure takes him but the pursuit of life is what keeps Bunky going. It’s another instance of Platz’s love for nature emerging, and of our main characters, lost and hopeless seeking life.

The machine, surreal world, seems to work in an opposite direction but with the idea of human connection being lost and found still being the ground work. While the stories in Vanishing Point are mostly good, some stand out more than others, some fall a little flat and are bit too short – “Pardners,” “The People’s Will,” “The Ventriloquist” – but Platz has more than enough happening to intrigue. Stories like “Man Eaten,” “River,” and “Barriers” are highly effective, well written, with enough of the bizarre to keep you intrigued along with a writing style that is unique to Platz. I’d place him in the ranks of Stephen King and Jack London, but his brand is unique, and he goes out of his way to find his own style. It’s written in as a final statement in Vanishing Point, “from his or her own well of isolated consciousness, claims to be the center of the universe.” And interestingly enough I’m brought back to the story “The Butler,” where a machine tries to fit into the real world. Isn’t that like all of humanity? We can feel for the robot Gilbert, as a machine he isn’t all that different from many of the other characters in Vanishing Point, his own consciousness is the center of things, and it can be deleted or continued in an instant and at the whim of uncontrollable circumstances. Richard S. Platz will tell us we have control, but through the stories in Vanishing Point we find that’s not something to be taken for granted. It makes for a strong and worthy collection of stories.