As Far As I Know by Joseph Somoza 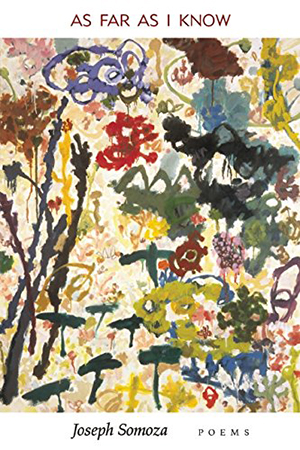 So Joseph Somoza begins in the poem “Makeshift” – an outstanding opener that begins the first poem inside the three sections that make up his latest poetry collection As Far I Know. It’s far from a quickly put together piece though, “Makeshift” has the power of sounding on the spot, but like many poems in Somoza’s collection it is a well-crafted and meticulous piece of poetry. That balance is something Somoza demonstrates well throughout; his poems are living things that are in constant motion with their style, unafraid to begin and end on a whim, but are also highly refined. Somoza’s poems may come off as spontaneous things – first jots from the soul often are – but his revision I suspect is where he adds a touch that makes his work not just more readable but also more of a well-crafted pleasure.
“Makeshift” is Somoza doing nothing more than sitting in his yard and describing what surrounds him (the mosquito perfume on his hands, the dog next door) – simple enough, but the ability to bring essence to otherwise meaningless moments, that is the mark of a great poet. In this respect Somoza serves us well. “Makeshift” is a comforting opening, smooth and rhythmic, but it’s also doing more than maintaining a balance between chaos and discipline or even adding life to what surrounds him. It is Somoza showing up to work. He has nowhere else to go, other than to take in what surrounds him – the swaying rows of locusts over the cinderblocks, the houses quiet until lunchtime – and now his job is to reach down, use his experience and his soul to give his world value. As “Makeshift” ends he outright tells us as much:

What makes Somoza unique, especially with poems like these (a lot of poets write about nature, themselves, the creative process), is his ability to say things plainly while also making readers feel connected to his world. Consider “Say Something,” where speaking directly to the reader he asks us, “What are you saying when you say something?” It acts as a double meaning – what is your message as an artist, along with what do words mean when you actually say them? The answer is up to interpretation as it becomes more of a philosophical poem than anything, but is still as fine an example in his collection of Somoza’s ability to not overstate his own message while drawing the reader in. He is letting us know expression and words are essential to life.

In that vein, you can imagine Somoza not trying too hard to write his poems as you read them. He is saying what he says to express life, and it is absolutely necessary to him to do so. In researching his creative method Somoza states “Rather than building the poem willfully line by line… I should allow the poem to build itself, allow words to call up other words, through memory… and see where it would lead”. Poems like “Living Theater” are prime examples of this, and lead to other poems that seem like direct offspring of each other. Somoza creates a balance where the importance is non-existent or sometimes understated, while still giving us rich, meaningful lines that not only reflect his own creative process but connect the reader through being easy to read. Take the following lines in “Living Theater” where Somoza the storyteller guides us through the scenes in his backyard:

“And then? The storyteller
Pauses for effect,
Unlike the way the story actually
Unfolds
Each unfold releasing all its secrets,
Naturally, necessarily,
Without melodrama.”

That is how much of As Far I Know unfolds – without melodrama, and with Somoza never trying too hard to win us over, but rather letting the poetry simply happen naturally. In his excellent “Free Verse” he asks himself “…who am I to try to convince them? Who Am I to disrupt things as they are?” This is not so much to the reader, but is in response to December leaves still on the ground that seem just fine not being raked until spring. You have to like Somoza’s approach here, and in all of his poems, they’re humble yet deep, as if he is saying directly to the reader, who am I to win you over? In this idea of “not trying,” or as Somoza goes, not knowing, he shines by letting the poetry tell itself.

As he gets into his middle section April Flowers the energy turns slightly but remains a reserved and quiet look from afar. In “The First Morning,” Somoza takes us to New York to when he and his wife first spend the night together. In a candid ends the poem by telling us:

“Happily together,
we get up, dress and
walk out to the city to
Celebrate
Our first morning as a couple.”

It is a line that is both plain and is a well-rounded hook on a beautiful poem. In fact Somoza has a real knack for love poems, In his depiction of life he writes several masterful ones – “Us” and “Rear View” – both poems are directed to his wife from a confessional space that read like letters to her – both are attempts to share feelings that are unsayable or at least seem impossible to express. The space and appropriateness for them lies only in a poem. I think Somoza feels this as he states in the quick gust of a poem “Us,” when he states “We try to share what in un-shareable of our lives.” Here the irony and the beauty of the poems themselves make them exceptional gifts.

There’s plenty of darkness here from Somoza too. Poems like “Evolution,” “After Ma Died,” and “From The Dark” are real looks at his childhood and coming to terms with the past – especially “Evolution” where Somoza watches himself age in the mirror and slowly become his father. In time he sees his father who is long gone staring back at him. It’s a haunting image. I’m reminded very much of poets like the Pulitzer Prize winning Charles Simic, and such poems from him like “Mirrors At 4am,” and “The Old World.” Simic is a bit more surreal and a bit more sardonic, Somoza has more of a tendency towards physical nature, but both are minimalists when it comes to word choice. Both have a way of expressing the intangible in simple yet effective ways.

Joseph Somoza has been at this a while, almost 55 years, yet his poems reflect an approach not all that different from someone discovering the love of poetry for the first time. His poems are professional, yet joyous, and rhythmically wondrous beings – alive and full of energy. They’re full of love and darkness that great poetry seems to balance and reading them feels quaint, humble, simplistic, yet also complex. There’s a great saying, In order to know anything one must first admit they know nothing, and that’s where Somoza’s poems excel, they come outward from only his experience and nothing more. It’s a humble approach, but there’s wisdom is his words, and some serious magic in his nature.