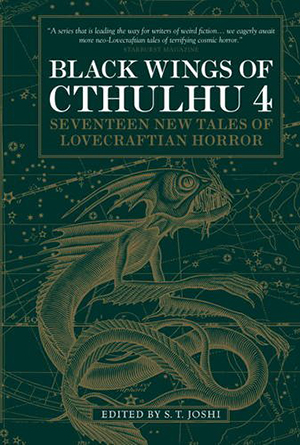 “They’ve already made waking life a dream and the dreamers into a mushy mass-mind where everyone shares the same dream of being the only one who matters.”

By far the longest tale in this collection is “The Wall of Asshur-sin.” The tale follows an archaeologist returning to the site of his first dig years later to uncover the site’s remaining secrets and eventually confront the nightmares from his youth.

“Night of the Piper” uses an interesting mix of Kokopelli from Native American mythology and Nyar’ la’ a from Lovecraftian mythos. Nyar’ la’ seems to be a version of Nyarlathotep, or the Creeping Chaos, which adds to the trickster aspect of the Kokopelli character.

Stories that transport the reader to another culture, land, or time are great and this collection of tales does a fine job of just that. This reviewer has not read the other collections in the Black Wings series, but after having read this collection fans of these types of stories would likely find them worth checking out.