Debt Cleanse: How To Settle Your Unaffordable Debts For Pennies On The Dollar (And Not Pay Some At All) by Jorge P. Newbery 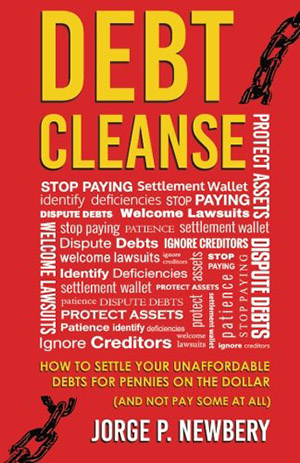 Entrepreneur Jorge Newbery has been both wildly successful and deep in debt. In fact, at one point, he owed creditors over 26 million dollars. But by utilizing legal loopholes and tricks, he was able to erase his debt – much of it without paying most of the monies owed – and now wants to share the tricks that kept him one step ahead of his creditors with the indebted American public via his website, debtcleanse.com, and the book Debt Cleanse: How to Settle Your Unaffordable Debts for Pennies on the Dollar (and Not Pay Some at All). Full of useful keywords and tips for finding legal ways to have unaffordable debt forgiven – as well as staggering, but relatable, statistics on the number of Americans who are underwater financially – the book proves itself a comprehensive companion to assist people in having debts forgiven, hiding their assets from creditors, and finding a way to become prosperous in spite of their destroyed credit score (because let’s be real: you can’t default on your debts without utterly decimating the credit you most likely have worked hard to acquire).

Espousing a Dave Ramsey-like focus on living within your means and disregarding credit, Debt Cleanse does provide useful tips for people with unsustainable debt. However, some of Newbery’s suggestions – such as not having any assets in your own name – make more sense for someone who is married to a credit-worthy person or already a homeowner, as those who may need to qualify for a lease for, say, an apartment at some point really can’t afford to have a low credit score. The book also raises a moral quandary in a sense – while many lending practices are unethical and designed to create a vicious cycle of need, is it really fair for someone to find ways around paying for debts, many of which they are actually personally responsible for accruing?

Regardless of one’s answer to that question, Newbery’s book provides valuable tools for those who want to stop paying on their ridiculous, overwhelming debts -and who are bold enough to plow ahead without fear, with meticulous records, and with an LLC to keep their assets from being confiscated.