Eve of a Hundred Midnights: The Star-Crossed Love Story of Two WWII Correspondents and Their Epic Escape Across the Pacific authored by Bill Lascher 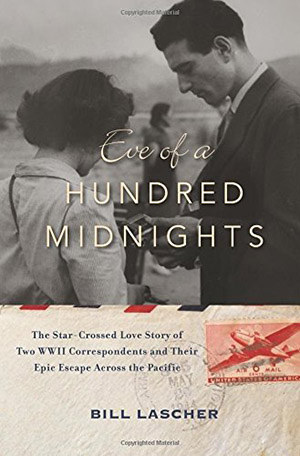 Eve of a Hundred Midnights: The Star-Crossed Love Story of Two WWII Correspondents and Their Epic Escape Across the Pacific, by Bill Lascher, is the history/biography of two individuals centered on the period of 1936 through 1942. Melvin Jacoby grew up in the Los Angeles basin interested in the outdoors and demonstrating an interest in writing. He attended Stanford University where he won a scholarship to study abroad at Canton, China. During this time he had the opportunity to visit other parts of China as well. After returning to Stanford, Mel ultimately graduated in June of 1938. He was able to return to China in October 1939. Japan was at war with China beginning 1937 and there was interest in reporting what was occurring, an activity in which Mel participated. Annalee Whitmore was at Stanford during much of the same time as Mel, although they had little contact. She also had an interest in journalism, but found limited opportunities. After meeting Mel and learning of his experiences her interest in journalism was rekindled. Ultimately she was able to travel to China in September 1941 where their relationship matured and the two were married in late 1941 in Manila. During January, following the attack on Pearl Harbor December 7, 1941, Manila was bombed and the couple began the race to stay ahead of the Japanese as both risked death if caught because they were Americans, had spent time in China, and had reported on the happenings associated with the war.

The author, Bill Lascher, is a journalist from the Annenberg School for Communication and Journalism at USC and from the University of California at Berkeley Graduate School of Journalism. When Mr. Lascher was about 20 years old he was presented with a gift from his grandmother. This gift was the catalyst for his writing this book. The book is a joy to read. Its organization is well constructed, presenting the history of the time and the events surrounding Mel and Annalee’s lives. The construction of that world utilized papers, letters, writings, photographs, film, and scrapbooks of those involved. This detail allows the era and the people to come alive without being heavy, grinding, or tiring. Photographs placed throughout provide helpful imagery of the people and events. Because many who read this may not be familiar with the locations where these events occurred and the individuals traveled, the placement of a few maps (something this reviewer enjoys referring to during reading) would help instead of constantly needing to refer to Google maps. Overall this was an enjoyable, interesting, and stimulating book. To follow the lives of civilians, particularly journalists with significant association with war, was compelling and captivating.