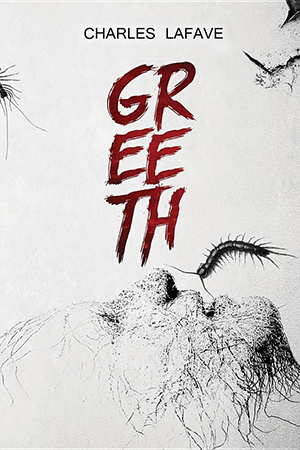 What do you look for when reading fiction? Character development? Originality? Familiarity? In Charles LaFave’s new book Greeth, there is all that and more. The book opens with an easily familiar yet unfamiliar scene as an introduction to the main character. Peter Buraku is hurrying up a set of stairs to get to his job on time. A few simple words and phrases reveal that the story is set in Japan. A few more and the reader realizes that Peter either has an unusual set of senses or he is prone to hallucinations. This comes all in the first two pages. By page three, the reader is told that Peter died at least one time as a young child. These snippets of fact told with sparse description all serve as enticements to draw the reader on to the next page and then the next.

The story unwinds like the proverbial ball of string, again with a twist, this one being the questionable material which comprises the string at any given moment. There is a pinch of disbelief and a dash of horror stirred into the mix of the story. Peter sits as the hub of the character wheel and the others extend like the spokes at various angles from him, even those who do not know him personally. There are wizards, ninjas, warriors, human-sized insects, golems, and even a werewolf. These are a friend, an ex-girlfriend, compatriots, enemies, and creations of his.

LaFave has done a good job making an unreal setting and series of events seem plausible. The book is accessible to read and the story itself moves quickly. Much of the storyline, though not precisely predictable, unfolds in an expected way. There are no hidden revelations until the ending, and even that makes sense in a science fiction sort of way. Greeth would be an excellent read for a sultry summer day when looking for an excuse to stay somewhere out of the heat.