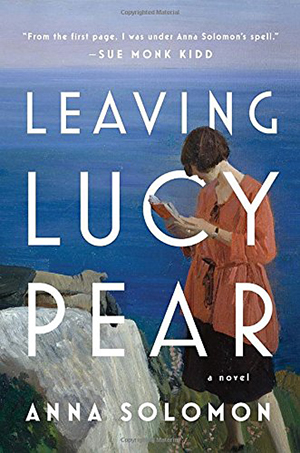 Leaving Lucy Pear by Anna Solomon is a historical novel with plenty of heart, but wavers in its execution. An eventful story that includes timely historical moments like the Sacco and Vanzetti trial, Suffrage, the Temperance movement, and the “dangers” of homosexuality and children out of wedlock during the early twentieth century, the novel fails to truly engage with its readership. Solomon creates a host of strange but likable characters who are challenging the formal views of society in post-WWI Massachusetts but cannot lift the story’s uneven narrative.

The story begins with a desperate, damaging decision that causes an aftermath of overwhelming proportions. When unmarried Beatrice ‘Bea’ Haven gives birth to a baby girl in 1917, she is forced to send the child to an orphanage, where she worries her daughter will never experience proper love and care. Thinking she can ensure her daughter’s safekeeping, Bea leaves her in her uncle’s pear orchard, where she knows a family in town comes to steal fruit from the trees. She sets the basket by the middle tree of the orchard and waits.

Almost ten years later, the novel revisits Bea, now taking care of her aging uncle, married to a seemingly absent husband, an active part of the Temperance movement, and anxiety-prone. A prospective politician in town offers to pay a maid to help her with her uncle’s care in exchange for the women’s voice in his campaign. But when Emma Murphy begins working for her, Bea’s past comes back to haunt her in a detrimental way.

While Leaving Lucy Pear brings to light the hardships of the working class, a society that diminishes the importance of mental health, abuse, and the female voice, Solomon’s narrative falls a little flat. Each character, with their own fascinating story, has the opportunity to share their viewpoint; some are welcomed, while others seem wholly unnecessary to the pace of the novel, leaving the story to feel choppy and disjointed in places. Solomon’s inability to control the narrative and character engagement causes too many interruptions throughout, at times making the novel hard to pick back up. With more depth to certain voices, and more exploration of their problems, relationships, and questions for the future, Solomon would have had more success. A fair attempt but it didn’t win this reviewer’s heart.