Midnight in Berlin: a Novel by James MacManus 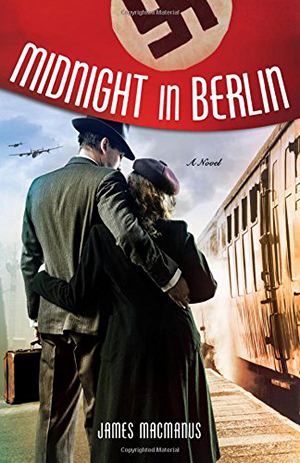 Here is a well-informed, smoothly crafted, fast-paced novel based closely on events in Berlin during the crucial months of 1938-39, and the European politics leading inevitably to war. The author conveniently explains all this, and more, in his Historical Note at the back of the book. It was a time when the Nazi party was all powerful in Germany; Hitler was ramping up his military machine towards war; the Gestapo dominated social and economic life with an iron fist; the Jews were being seriously harassed, brutally dispatched, forced to flee, or bundled off to concentration camps; Great Britain and America were ignoring all the signs of injustice and trouble; and, in particular, the British Ambassador at the embassy in Berlin ‒ around which most of the story takes place ‒ acted as if nothing unusual was happening, to the ire of those who were more aware.

Many historical characters are highlighted in this book, including Neville Chamberlain who, as Prime Minister of the United Kingdom, pursued a naïve and misguided policy of appeasement toward Hitler, including signing the Munich Agreement in 1938 that gave the German-speaking part of Czechoslovakia (the Sudetenland) to Germany. Reinhard Heydrich was chief of the Geheime Staatspolizei, better known (and feared) as the Gestapo. Sir Nevile Henderson was the British Ambassador. Sir Stewart Menzies was chief of the British Secret Intelligence Service. Lord Hore-Belisha was Secretary of State for War. Colonel Mason-Macfarlane was the British military attaché to Germany. Kitty Schmidt was the madam of a renowned Berlin establishment that looked like a posh restaurant and bar, but was more importantly (to the story, and behind closed doors) a renowned house of prostitution visited by many high officials.

All of these real characters and a few more, plus several fictitious ones, play important roles in the novel and carry the story along. The main action revolves around the British military attaché, whom the author calls Noel Macrae, and his wife, Primrose. Part of the plot focuses on their marital problems at home, and a serious falling out between the attaché and the ambassador at the embassy. Another aspect of the story highlights the attaché’s close relationship with one of Kitty Schmidt’s girls, a young prostitute (Jewish) deliberately assigned to the Salon by the Gestapo. Parallel to that relationship is Primrose’s friendship with an important member of the German high command. Aha, the plot thickens.

By now you begin to see some of what goes on in this complex but very readable novel. It is a plausible and volatile mix of strong personalities involved in social shenanigans and political intrigues spiced up with passion and conspiracies.

The author, James MacManus, is a versatile writer, with the ability to make some very prescient observations that in time come full circle. While attaché Macrae was waiting to observe a public event featuring Hitler and the high command, for example, he is briefly overwhelmed with ill-feelings towards them all: “Macrae suddenly wished he had brought his hip flask with him. Or a grenade. A decent Mills bomb would wipe out a good half of those present. Then they could lie screaming in agony on the ground, blood seeping into their smart clothes, life ebbing away. Macrae rebuked himself. It was too easy to let emotion master the mind. It was too easy to feel pity and sheer rage. That was the trouble with Berlin in 1938. It was hard not to succumb to such emotions.”

If you like good historical fiction, and have a penchant for international politics and an interest in the rise of Hitler and life in the diplomatic world of Germany on the brink of war, this is a recommended read – emotions and all.