Searching for Paradise by T.L. Hughes 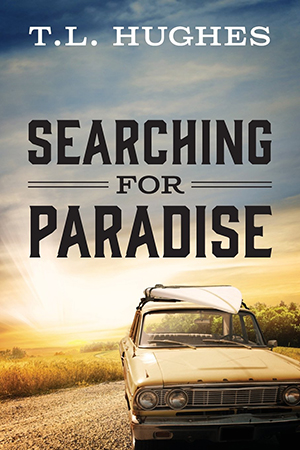 Road trips with your friends are fun. Lengthy road trips that take place in the 80s after three free-rolling friends decide that they’re tired of trying to make it in 1980s Hollywood are fun, interesting, and introspective.

Searching for Paradise by T.L. Hughes is just that, a novel about three friends who decide to go on a cross-country trip with their ultimate goal being London. Mike, the main character of the novel, has just broken up with his girlfriend, and it’s time for Mike to get out of town. The tree friends ramble across America, and meet up with people they’ve known as well as people they’ve never known.

This novel is funny and somewhat irreverent at points. The reader never really gets to know the characters that are peppered throughout, as the boys never really stay in one place for too long – but they’re fun to meet in any case. Mike’s train-of-thought jumps back and forth between his past, his friends, and his love of music. Mike’s tone changes throughout as he begins to “grow older,” the travel and road trip being an almost literal metaphor for the progression of life and the change of point of views. At the end, Mike seems almost fearful of the time he knows will come to pass – signifying that his “dog days” might be over. As an adult, the progression of time comes way too fast, and inevitably his friends settle down and get married. If there were one or two things that I might say about this novel, it’s that at times, the writing seems to meander a bit. It suits the novel just fine, as the characters seem to meander themselves. Also, the format of the novel is a little frustrating as the font is quite small and a lot of it is tacked onto one very large page. However, this doesn’t take away from the overall story. Pick it up – road trips are good summer reads!