The Call of the Primes: Surprising Patterns, Peculiar Puzzles, and Other Marvels of Mathematics by Owen O’Shea 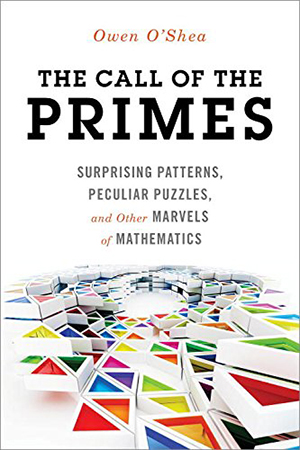 The Call of The Primes: Surprising Patterns, Peculiar Puzzles, and other Marvels of Mathematics is structured into chapters covering various mathematical concepts that many may have been exposed to or heard of over the course of their education. Many of these present quite a few interesting details and observations of numbers, relationships, discoveries, theorems, and equations, which are enjoyable. Some chapter titles include the numbers pi, e, phi, the square root of -1 and the square root of 2. Others are the Fibonacci and Lucas sequence, the Monty Hall conundrum, and square of numbers.

While throughout the book there are the interesting details and observations about the mathematical concepts, two things become apparent. First, this is a book for those with more than just a passing interest in the subjects presented. Very quickly on almost all subjects presented there is rapid progression into equations. It is recognized when dealing with numbers that one should expect that to occur, but unless you have a significant interest in exploring them and the beauty mathematicians may see in them, it is suggested this book is probably not for you. The second issue is the use of a “friend” who is invited at the end of a number of chapters (by e-mail communication) to add to the subject of the chapter and make observations about the preceding presentation. This individual is describe as being a numerologist, located on the west coast (unclear if this is Ireland or the United States), and is known as Dr. Ming Cong. If one wishes to inquire about Dr. Cong, may your success be better than this reviewer’s attempts. There are other contributors to the book, the second with significant training and background in mathematics. The primary author appears to be interested in numbers, their origins, the equations, and has written some articles including a book on similar findings but appears to be an unknown otherwise. As stated earlier, the true audience for this book is likely those with more than just a passing interest in these topics.