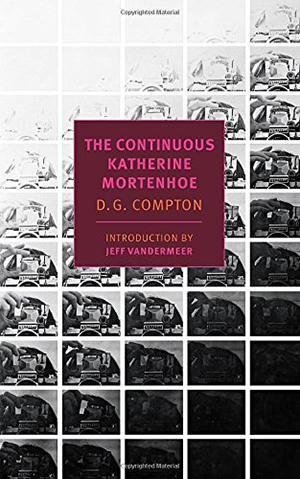 He is the “the man with the TV eyes” and he has come to watch her die. In his pain-starved culture, voyeurism upon death passes as entertainment. In the futuristic world of The Continuous Katherine Mortenhoe, disease is all but eradicated and no one dies except of senescence… except for Katherine Mortenhoe. She is about to die. Roddie Patterson, the man with the TV eyes, is tasked with recording her final days with his unique eyes, having been given the ability to record what they see for the consumption of mass audiences. But she does not know she is being exploited on film, and he only wants to discover the continuous Katherine Mortenhoe.

This science fiction masterpiece is not concerned with aliens, or far planets, or apocalypse, or any of the other usual building blocks that makes up the genre. Instead it concerns itself with the destiny of humanity in the future-present, in a world that looks quite a lot our world today but for a few small, but substantial, exceptions. Personally, this is my favorite kind of science fiction—the kind that hits close to home and makes you wonder how little it would take to utterly transform the world. People will always be people (who knows how much they change), but sometimes small advances in technology can have effects beyond the scope of our imaginations—or at least most imaginations. Authors like Ballard, Dick, and LeGuin can make such imaginings. So, with the Continuous Katherine Mortenhoe, D. G. Compton proves that he can imagine with the best of them. With incredible prescience for a novel written over forty years ago, Compton predicts much of what constitutes our current world. Our world, as with his, glues itself to television sets and computers. Businesses seek to exploit individuals in reality television for the sake of profit. But with Compton’s futuristic world, medicine has advanced to such staggering levels that no one dies of anything other than old age and accidents. As a result, people have nearly forgotten how to feel many emotions. Grief has all but disappeared. To help them rekindle these dormant emotions, reality shows are created as a proxy for genuine feeling, and so the masses can suffer alongside the sick. This is the apparent price of utopia.

Katherine lives as a cautionary tale—in microcosm—for a certain malady from which his mankind, as a whole, suffers. She is afflicted with Gordon’s Syndrome, described as a modern malady in which the brain becomes so aware of its own thoughts that it creates a type of feedback loop that it fries out the neural pathways of the brain. Such is the danger and destiny of a mankind that must exploit this unfortunate Katherine Mortenhoe as she slips into death in order for its television audience to emote and share in the human condition. Mankind continues to look at itself, to consume its own people, until society itself will burn out, just as Katherine (perhaps needlessly) burns out her own mind. Or, at least, that is what Compton seems to portend.

Compton brilliantly alternates perspectives between the two protagonists, Katherine and Roddie, to flesh out the exact nature of her disease (as well as mankind’s). With Katherine we encounter her affliction at the internal level, feeling along with her the outrage at a world seeking to exploit her as a victim as she struggles to cope with her own imminent demise. Furthermore, she is endlessly caught up in her own struggles and misgivings that she fails to interact with the world around her. In Roddie, we follow a corporate stooge with his altruistic, but vain, attempts to get to know the real, continuous Katherine. But he is also a part of the system, and, try as he might, he cannot break free to encounter the real and continuous Katherine Mortenhoe as long as he functions as a reporter and attempts to exploit her for the sake of his audience. Neither protagonist garners any insight until they discard the roles others have placed upon them and desist in their attempts at control. Only then do they encounter each other. Only then do they find hope in their situations.

What I really enjoyed was the dance between Katherine and Roddy as they fought to free themselves from the self-administered constraints of modern life. They live that classic hero story in which the heroes start as nobodies with only their big dreams to succor them. They must encounter monsters, make friends, and fight to save themselves. At the end, they have grown independent, strong enough to take on the insurmountable obstacle that started the journey in the first place. But, if I am going to read a hero story, this is how I want it to be—with rich worlds and deeply flawed characters. I was riveted to each page as I anticipated impending tragedy. But I also encountered wonder, and undying hope, imbued in the words of each page, marking the tenacity of the human spirit to overcome all obstacles and find solace despite the most perplexing of situations. These characters, Roddie and Katherine, made me feel that no matter how bad our situation gets, no matter how unpredictably mankind progresses, there is enough good stuff inside of us to overcome all obstacles and triumph in the end. Maybe not big, world-changing triumphs, but personal ones—the important kind. This is good science fiction. This is the stuff from which stars are made. No ordinary book can accomplish this—only an extraordinary one that I hope will live on continuously….