The Crown Ain’t Worth Much by Hanif Willis-Abdurraqib 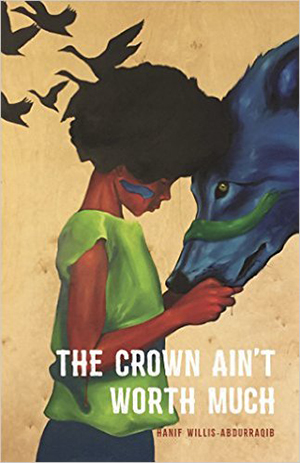 There’s become a somewhat popular trend in recent years wherein a person will, completely out of the blue, pose the question: Is poetry dead? It’s presented by people claiming to play devil’s advocate, who just so happen to hold the opinion that the so called “poetry” being written nowadays is too loud, clunky, and angry. The laughter behind their asking, “Is poetry dead?” is always detectable. It doesn’t matter if others agree or not, they themselves have already made it clear they consider the art form deceased because of their personal opinions of the ever growing popularity of slam poetry and spoken word.

This question, in and of itself, is boring, inane, and obviously not true.

There is so much important poetry being crafted by talented writers nowadays. Does it sound like the Shakespeare’s, Whitman’s, Poe’s, or Blake’s of yesteryear? Clearly not. Poetry – much like everything else – is a growing, thriving art form, and it only makes sense that the style would evolve over time. We’ve embraced this with cinema, novels, television, and radio – so why not poetry?

With poetry in this day and age, one of the great things that readers (and viewers) are exposed to is all of the varying voices. Poetry presented in classroom settings is usually written by dead, white men talking about nature, women, death, flowers, or religion. While it’s perfectly acceptable that these long dead poets wrote pieces that are still fawned over to this day, it’s worth asking if their poetry should even be considered important in the twenty-first century?

We are seeing a range of new poets speak about actual important topics. Black Lives Matter. Feminism. Sexism. Racism. Abuse. Trauma. Body positivity. Depression. Sexuality. Misogyny. Queer issues. Chronic illness. Transgender and Nonbinary matters. Grief. Mental illness. Say what you will about the spoken word scene, but this art form is clearly shining a light on topics that need be addressed, and doing so in a beautifully crafted, raging wild form that poetry has taken on.

Enter Hanif Willis-Abdurraqib. Anyone who claims poetry is dead has obviously never encountered this man’s body of work.

Abdurraqib’s The Crown Ain’t Worth Much is his first published book of poetry – though he’s been published online many times, featured in plenty of spoken word videos on YouTube, and has competed in nationwide poetry competitions. It is an understatement to claim that he is simply good at his craft; poetry flows from Abdurraquib in a meticulous, wonderful way that is not often seen. Every ampersand is perfect; every line break and indent knows its place. To understand how far poetry has come since the simple days of the sonnet, one need look no further than this beautiful book of poems.

The Crown Ain’t Worth Much (title taken from the popular TV show, The Wire) focuses heavily on Abdurraqib’s youth with a setting in Columbus, Ohio. The poems focus heavily on gentrification and racism, and what it’s like to grow up black in America. The poet does not shy away from the violence faced by himself and others and the incidents he’s gone through over the years. He also speaks of personal matters, such as the death of his mother, depression, relationships and marriage, his home city, and the affinity he had for the punk scene growing up. Along with poems on punk, there’s also a consistent theme of music tied into his work, bearing mentions to such artists as Whitney Housten, Drake, Bruce Springsteen, Kanye West, Pete Wentz, and others. The poet parallels the music in comparison to his own experiences and talks about the effects the artists’ work and lives have held over his.

To pinpoint a highlight of the book is impossible. Every poem is honed, polished, and presented with utter rawness and defiance. Lines such as “that it is / just like the nighttime / to rename everything that moves / into a monster?” and “I do not say noose when I mean bullet / I do not say bullet when I am asked what keeps me awake at night / I do not keep track of the names / I do not keep track of my own body” embrace every page with clarity, insight, and tenacity. Abdurraqib’s words are not a tempest or a flood; he simply cracks his heart open and offers it to the readers. It’s the audience’s duty to tread lightly and accept all that he has to give, and what a heart wrenching, eye opening gift it is.

If any doubt still lingers, search his work on the Internet. The poet has written for MTV, Pitchfork, The New York Times and many more critically acclaimed sites. Better yet, find his poetry; watch his poetry. Pieces featured in the Abdurraqib’s book, like “The Crown Ain’t Worth Much,” “The Summer A Tribe Called Quest Broke Up,” and “Maybe None Of Us Are Actually From Anywhere,” can be found on YouTube, along with a slew of his other work. Seriously, if potential readers or poetry aficionados have a moment to spare, this reviewer implores that these videos be not only watched, but devoured.

To call poetry a dead art form is a falsehood. People actually paying attention know this from the immense amount of amazing poetry being presented today, and Hanif Willis-Abdurraqib is up there with the best of the best. His experiences are raw and real; he shines a light on all that he’s faced and does so in a gorgeous, poetic fashion. The Crown Ain’t Worth Much is not a scream nor is it soft spoken; it’s simply poetry at its finest, and only a fool would deny how much that is worth.