The Hemingway Thief by Shaun Harris 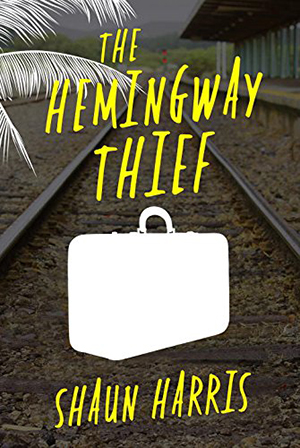 The author Shaun Harris is on to something in this debut novel. It’s a Mexican caper in search of an old suitcase stuffed with a year’s worth of missing Hemingway stories. The main character is a writer known as ‘Coop’ (for Henry Cooper, aka Toulouse Verlour) who is, in the words of one of the book’s minor characters, “some fag [who] writes cheap chick books.” Coop the writer hangs out at an equally cheap Hotel Baja with its owner, Grady, and a useful hang-around named Digby. When Grady takes in a total stranger named Milch who’s been beaten up by someone and who, for personal reasons, is after the same suitcase, the plot is off and running. Grady, Coop, Digby, and Milch are off on the book-length chase.

Some of the characters in this fast-paced novel are decidedly shady, some are sly, some are killers, and some are already dead or get dead along the way. Ridiculously funny in places, wild and violent in others, The Hemingway Thief is all about unearthing the Hemingway papers and uncovering a plot to a potential new novel for Coop to write, if he lives long enough.

As I read the Hemingway Thief, I learned a few things, including some crazy jargon, both flippant and floppy which, if repeated here would be spelled mostly in asterisks. I also saw things in new pop culture ways, off the wall and adolescent. But, then, I’m much older than the book’s author, and not terribly comfortable with much the genre describing a violence-prone, rough-edged lifestyle. One thing is sure, though ‒ if this story is ever made into a slapstick humorous Hollywood Western, it may go over as a great hit!

I’ll give credit to the author for creating some odd and crusty but believable characters. Here’s how Shaun Harris writes how Elmo, one of the important fellows in the story, looked to Coop when they first met: “His accent was old, southern, and aristocratic, but the gentility had been watered out of it, like a good bottle of booze cut just once too often. In the firelight I could see he had one of those faces that was impossible to put an age on.”

If you think you’ll learn something about Hemingway here, it’s a start, though a thin one. While the author has obviously done his homework on Hemingway’s life and lore, and brings it into play in a few places, the book is not about Hemingway. Nonetheless, there’s a good description of the young Hemingway in Paris, as a guy with “a decent job, a loving wife, and an interesting life in a major European city. If he had been an ordinary man it would have been more satisfying, but Hemingway was not an ordinary man. He was a writer. Few professions draw such insecure, narcissistic, paranoid, depressive, and needy applicants as the writing life. The need to be published, to be validated, churns in the writer’s breast like a non-stop manic engine. The writer’s waking life is filled with dreams of success and his sleep is plagued by nightmares of failure.” (Is Shaun Harris exposing some of his own anxieties as a writer here?)

The Hemingway Thief is an entertaining, eclectic, mildly racy literary mystery story, filled with some funny/likeable and a few not-so-funny/unlikeable characters, all racing around either chasing, or hiding from, or shooting at one another while in search of the precious lost suitcase. Who among them will live long enough to find it?

The author Shaun Harris has talent. He reads well, with promise to no doubt read better in his future novels.