The Unorthodox Ox by Thomas Morison 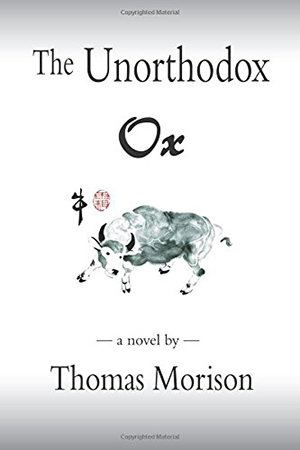 Do not be fooled by the title of the book. The Unorthodox Ox, by Thomas Morison, isn’t about animals, though the novel’s protagonist works as an administrator in an environmental company and animals play a significant role in the story – especially one poor cat that was hit by a car. This accident had an immense impact on the protagonist’s life. Readers should be aware that the book isn’t a quick and easy page-turner, and death is a constant theme in this novel about one man’s soul-searching.

“So there was his destiny that he would not have believed possible, but it was inevitable, despite his or anyone’s incredulity.”

Once an enthusiastic field naturalist who saw himself as a part of nature and dreamed about going to Madagascar and catching its unique beetles, Harold has become an unsatisfied department manager. He also is also very disappointed in his marriage. This combination of events – at home and reports and memos about the extinction of endangered species – creates an atmosphere of impending disaster. He perceives the world as a living hell. Having bad recurring dreams, he is convinced that his life is ruined. He isn’t even sure who he is anymore, and keeps a folder of enraged resignation letters and suicidal notes in his office. He is lost, but despises becoming a slave to old obligations. He hates the idea of being self-pitying for the rest of his life. Understanding that some sacrifices should be made to save his lost soul, he tries to trust and follow his instincts. However, some of these instinctive decisions are questionable.

The book is a kind of parable and it is symbolic that the protagonist appeared here only under his first name, Harold. According to the dictionary, this name is etymologically close to herald. So maybe his main message is that “there are circumstances for which the choices there are to make will be regretted even when choosing to do nothing is the wise idea.”