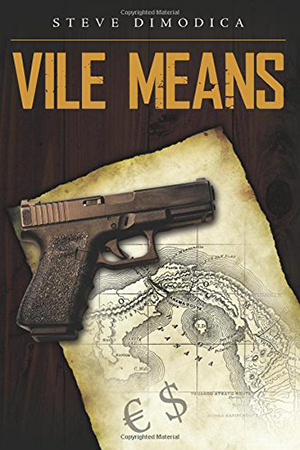 Written by Steve Dimodica, Vile Means follows the 1999 events pertaining to the United States and Panama’s relationship through the lens of historical fiction. With the USA scheduled to return the canal to the Republic, things begin to go awry. When a warlord begins ravaging villages and senselessly killing locals, fear and uncertainty spreads across Panama. It’s then up to a covert team of operatives: a squat Italian, a beautiful secret agent, a swarthy Irishman, and a dead man. Will their skills in espionage be enough to stop the slaughter of a nation before it’s too late?

Vile Means, being Dimodica’s third published novel, is written quite well. There’s no distinct artistic flourish in the author’s craft, but his writing is sturdy and gets the job done. Dimodica builds his story brick-by-brick, layering every chapter with new faces and more intrigue. The story is a long one, but the chapters are all crisp and short, making for a speedy read.

This book is perfect for readers fond of historical fiction, spy dramas, or political thrillers. It stays in its assigned genre and never wanders far. It is very apparent that Dimodica knows his stuff when it comes to intrigue. In his author’s biography, he credits himself as having worked in Army Special Forces, Military Intelligence, and other counterintelligence positions. Dimodica’s time and experience in his career shines through his words. He has a clear understanding and grasp on the subject, filling Vile Means with gripping realism.

The book is not without its faults. The plot does drag in several sections, usually depending on which character has the spotlight. Each chapter places focus on a different person within the cast of over a dozen faces. Some of the characters have rich, interesting story lines, or at least give the reader reason to invest in their worth. Others, such as Joshua or Dalton, can be a bit of a snore. The entire book, for that matter, may not be everyone’s cup of tea. If readers are not fond of the political and/or spy genres, this book would certainly not be for them.

It’s worth mentioning that Vile Means does contain plenty of scenes of torture and violence – especially violence towards women. This aspect of the novel is, unfortunately, ingrained in this genre of fiction, so it’s not exactly a surprise. Also, multiple women are raped throughout the duration of the novel. While the author does elaborate on the gore quite a bit, the scenes of rape happen off the page and are only alluded to. Nonetheless, readers should be aware of this trigger warning, as these elements are consistent in the story.

There aren’t many female characters featured in Vile Means – except for background “sex slaves,” there’s really only a meager five or six females among a slew of male faces. The main female character, Jessica, is written well enough. She’s capable, intelligent, and holds her own in a male dominated profession. That, however, does not stop the author from continually commenting on how beautiful Jessica is at every given opportunity. While an attractive, sexually confident woman can be a strength in your story, reminding the audience how gorgeous all of Jessica’s coworkers find her to the point where it feels like the reader is being bludgeoned in the head with this fact hardly seems necessary.

Though perhaps not the right fit for every reader, political intrigue enthusiasts will find great thrill and enjoyment in Vile Means.