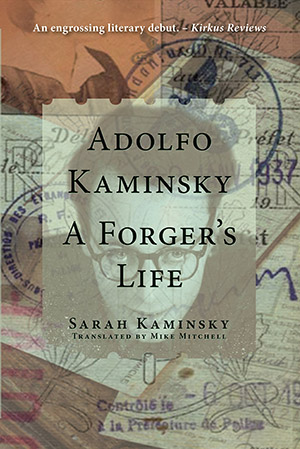 When Sarah Kaminsky was a girl and got a low grade at school, to keep it from her parents she skillfully forged her mother’s name. “I’d never have dared to try and copy my father’s,” she writes, “it’s absolutely impossible to forge.” When her father found out and confronted her, rather than berate her act of deception “He laughed so much he couldn’t stop,” She didn’t know then that he was probably the greatest, but virtually unknown, identity-forger of the 20th century. Later, in adulthood, when she learned more about who he really was and all that he had done to save lives, she felt compelled to write his story.

Adolfo Kaminsky: A Forger’s Life is his memoir, as told to his daughter. It’s the true story of a man who, as a teenager, joined the French Resistance and forged identity documents in World War II, then during the Algerian War, and in several other clandestine situations. He fabricated untold passports, and saved untold lives. Many, but by no means all, were for French Jews intent on escaping the German occupation of France and near certainty of death in a concentration camp.

Very early on he understood the significance “of the word ‘papers’, those indispensable documents that allow you to move legally from one state to another” and to safely escape when necessary. He knew that without proper and convincing forgeries his clients were condemned to immobility, or worse.

Kaminsky did all his work in the strictest secrecy, without pay. Consequently he was always in debt and had problems maintaining personal relationships and keeping family obligations.

In 1971, when he made a decision to finally stop, he did the math. “At forty-six I’d been a forger since I was seventeen. Almost thirty years. Surviving that long was something of a miracle in itself,” he says.

A Forger’s Life is a gripping book. Its truth is beyond question. Kiminsky and his daughter have met survivors who still have the documents he created that saved them. While he was a secret forger, he successfully pretended to be a struggling photographer. Sarah Kaminsky has done a masterful job of capturing the context and startling details of her father’s heroic subterfuge and duplicity.

At first, Sarah Kaminsky tried writing her father’s story in the third person ‒ about him. But when that didn’t feel right, she switched to the first person ‒ by him, as told to her. The result is a compelling memoir, so absorbing that I read it in one sitting. As a forger, Adolfo Kaminsky was technically creative, working tirelessly in his secret laboratory to put the necessary words, seals and stamps on the life-saving fake documents that he made. For all that he deserves high honors. But without his daughter’s literary creativity the compelling story of this shy man’s remarkable life might never have been told.

Adolfo Kaminsky: A Forger’s Life is a suspenseful, captivating, and thrilling account of an exceptionally brave and daring man.