Among the Headhunters: An Extraordinary World War II Story of Survival in the Burmese Jungle by Robert Lyman 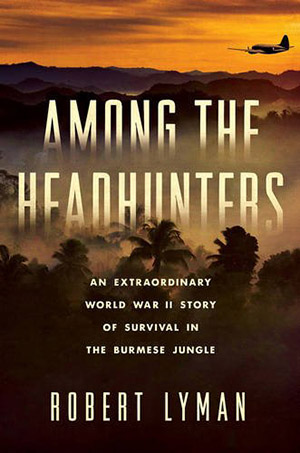 On August 2, 1943, twenty-one men were flying in a twin engine C-46 from Chabua in northwest India to Yunnan, China when the left engine failed, causing them to be unable to clear the mountains. The plane’s dropping altitude heralded a crash. To save themselves, the pilot ordered everyone to parachute out of the plane. All but the co-pilot survived to begin a 25 day ordeal in the jungle shared with villagers with a cultural practice of headhunting, and nearby Japanese military forces. Although they were aware of the risk to them from the nearby Japanese soldiers, it was not until several days after they gather themselves together did they realize the local villagers also posed some potential risk. One of the survivors was Eric Sevareid who documented elements of the crash and rescue. He went on to become a CBS journalist and a reporter of significant renown.

The book, Among the Headhunters: an extraordinary World War II Story of Survival in the Burmese Jungle, is written by Robert Lyman, a British military historian with 14 previous publications. About one-third of the book is spent on the actual events which are presented in detail and are very interesting. Of the other two-thirds, a portion provides information about the local areas at the time of the crash, but the majority of the book is spent presenting background of the English colonization of the regions, and the interactions with the headhunting villagers. This includes efforts to suppress the headhunting behavior and details of new developments after the survivors were rescued from the jungle.

The significant details of the region and its history would be easier to understand, follow, and enjoy if better maps were provided. One has to rely on the written descriptions of locations and travels which can easily lead to superficial reading of these portions secondary to lack of familiarity and understanding of these places. The vast majority of the photographs are documentation of the headhunting villagers and the efforts at suppression. This reviewer wishes that a map of the locations discussed had been included. The copy provided to this reviewer was an advanced review copy and there may be maps included in the final publication. The story of the adventure these men faced is interesting but short, with much of the book representing a history lesson of the region which unfortunately tends to take focus away from their survival story.