Bitter is the Wind by Jim McDermott 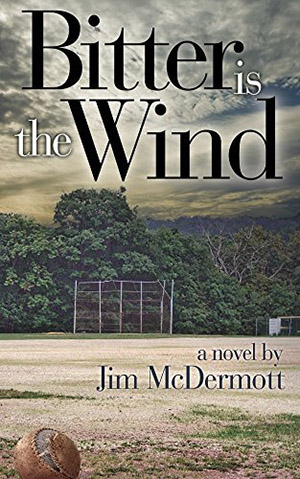 Bitter is the Wind is a generational coming-of-age story about a boy and his dad living in a rural area of New York State.

George Johnson senior takes the first hit when his dreams of baseball stardom are cut short after he gets his girlfriend pregnant and commits to marriage and raising the child, George Jr. His second, and George Jr.’s first, is when Mrs. Johnson and their little girl are killed in a car crash when George is only seven.

The story is mainly concerned with George Jr.’s adolescence and his tendency to act out his grief by retaliating against perceived slights. His life is further complicated by his innate resistance to control of any sort. He lives his life on a short reign that threatens to let go at any time. My main reaction while reading the book was waiting for the other shoe to drop and effectively prevent any happy ending right then.

Three things combine to save the situation. The first is George Sr.’s stolid determination to raise the boy, no matter what. The second is the female influence from Ursala, a neighbor lady, and finally there is the fact that George Jr. is really smart.

For all that George is smart, he has a hedonistic streak so that his main goal in life is to make enough money to obtain sufficient girls and beer. As you might imagine, this leads him to enter the MBA program at the Wharton School of Business – an elite school which his grades and ambition for money have made possible.

The question you, the reader will have is whether the Johnsons will reach a spot of stability and happiness. The ending of the book doesn’t really give an answer to that question, but does deliver a mild shock to the reader, and the speculation it engenders on George Jr.’s behalf is wide open.

Bitter is the Wind is a pretty good first novel and while it is not groundbreaking, it’s a pretty good read and is spiced with news events from the period that will bring back memories for anyone who grew up during the 70s.