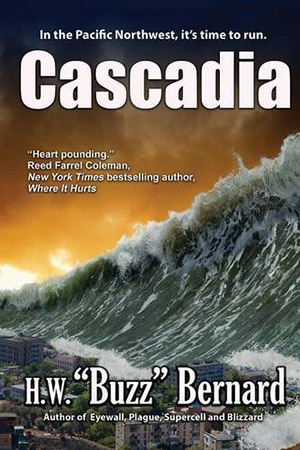 Buzz Bernard’s Cascadia tells a story about The Really Big One—the Cascadia Subduction Zone earthquake and tsunami that may likely devastate Oregon’s north coast. The subduction rips along the 700-mile area where the Juan de Fuca Plate dives under the North American Plate from Vancouver Island to Northern California, producing an incredible 9.3 earthquake.

The book opens by filling us in on the geologic details and history of subduction quakes along the Northwest coast. At times, it has a textbook feel, but as characters are introduced, the novel gathers itself and proceeds with a riveting story that does not disappoint.

The primary point of view is through Rob Elwood, a geologist who knows all too well the dangers and the history of past Cascadia quakes and tsunamis. Bernard weaves his story through other points of view, too, bringing several people and their stories together in the Oregon coast town of Manzanita.

Some of the stories seem a bit improbable, but surviving such a devastating event can also be considered improbable. Bernard handles the potential strain on credulity well and pages keep turning as the characters and their stories unfold. Good storytelling always puts the reader on that fine line.

We see the aftermath of the events from the air and ache for the communities destroyed. Some of Bernard’s descriptions are not for the faint of heart. Suspense ebbs and flows like the tides. There are also threads of magic realism that tie the action to the history of natural disasters all over the world. It’s a nice touch.

A couple of minor stories get left hanging and the beginnings of recovery might happen too quickly, but it’s a rousing read that is hard to put down once everything gains momentum. Bernard gets his facts right and knows the tsunami inundation maps well. He gets the history right and his portrayal of the destruction is solid. He also illuminates the need for disaster preparedness, not just in western Oregon, but everywhere.