Cinderstella: A Tale of Planets Not Princes by Brenda S. Miles and Susan D. Sweet, illustrated by Valeria Docampo 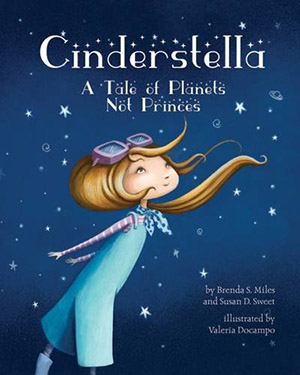 Cinderstella: A Tale of Planets Not Princes is a modern retelling of the classic fairytale, with a twist. While her stepsisters are focused on the upcoming ball, Cinderstella has her eyes on the sky. Then the fairy godmother turns up, attempting to help Cinderstella get ready for the ball. Why doesn’t anyone realize that Cinderstella has interests beyond parties and dresses? Will she find her happily ever after, or will she be bundled off to meet the prince no matter what?

It’s nice to see the Cinderella tale being retold in a way that informs girls that it’s fine if they aren’t interested in stereotypical feminine things. Cinderstella’s interest in science and exploration is something that should be fostered should young children of either gender show interest. The illustrations are lovely and very colorful with plenty of detail to draw children back to the book again and again. In the very back of the book there are several pages aimed at parents and educators that offer suggestions to engage children in discussion and to help foster interests in things that are traditionally seen as “unfeminine.” This is a wonderful addition for people who agree with the book’s overall message, but don’t have a clue as to where to put ideas into practice.

Sadly, Cinderstella doesn’t break away from the Disneyfication of Cinderella as much as it could have. While it’s wonderful that Cinderstella manages to foster an interest in the world beyond dresses and parties in her stepsisters, it is disappointing that they remained cast in a bullying light – which was later rewarded when they got to “escape” with Cinderstella in the end. Cinderstella and her stepsisters are also much younger than traditionally depicted – maybe 8-10 at best. This makes the stepsister’s interest in meeting the prince at the ball somewhat perplexing. There are no parents in this version – no evil stepmother or dead father are mentioned – and the closest we get to parental supervision of any kind is the somewhat bubble-brained fairy godmother.

All said, Cinderstella is worth picking up as an alternative to the Disney version of the tale, and to show girls that “parties and princes are fine,” but it’s also perfectly alright to have other interests.