Democracy: A Life by Paul Cartledge 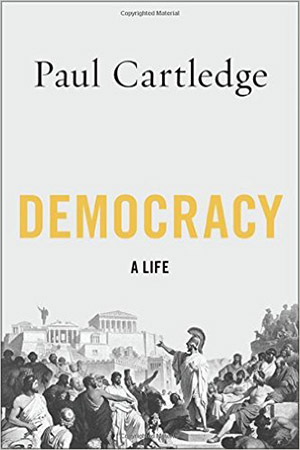 Ancient Greece first coined the concept of “democracy,” yet almost every major ancient Greek thinker-from Plato and Aristotle onwards – was ambivalent towards or even hostile to democracy in any form. The explanation for this is quite simple: the elite perceived majority power as tantamount to a dictatorship of the proletariat.

In ancient Greece there can be traced not only the rudiments of modern democratic society but also the entire Western tradition of anti-democratic thought. In Democracy, Paul Cartledge provides a detailed history of this ancient political system.

Cartledge surveys the emergence and development of Greek politics, the invention of political theory, and-intimately connected to the latter- the birth of democracy, first at Athens in c. 500 BCE and then at its greatest flourishing in the Greek world 150 years later. Cartledge then traces the decline of genuinely democratic Greek institutions at the hands of the Macedonians and – subsequently and decisively – the Romans. Throughout, he sheds light on the variety of democratic practices in the classical world. The book renders a vivid picture of the nature of “democracy” in some of the “citizen-states” of Ancient Hellenistic Greece, although it primarily focuses upon the Athenians because the evidentiary record for Athens is the deepest – particularly for the years 350-322 BCE.

There was no single form of democracy; in fact, there were as many as 1,000 different political entities in ancient Greece. Sparta’s opposition to democracy played a large part in inhibiting its spread in the Aegean world. Plato, too, was anti-democratic, seeing the institution as mob tyranny. In Cartledge’s view, there was no kratos (power) exercised by any demos (citizen) until at least 500 B.C.E. Argos, Naxos, Corinth, and Syracuse had popular governments, but Athens led the way as a direct democracy. Athens’ system of self-government based national government on the local demes, where adult males had to be inscribed on the citizen register. The author stresses the difference between the direct and representative forms of government, noting how population numbers preclude direct participation in modern times. By 30 B.C.E., the Romans had engulfed the Hellenistic world, stamped out her democratic institutions, and set the tone for political life until the 18th century. Democracy was effectively shunted aside as the Catholic Church and feudalism dictated the divinely ordered power of kings and lords. Moving onward toward the Enlightenment, we find so many of the same arguments among Rousseau, Voltaire, Burke, and Thomas Paine, where men want equality, as long as some are more equal than others.

It is when Cartledge ventures into forms of government in “modern” times (i.e., 19th 20th, and 21st centuries) that he falters. The reason for examining the modern iterations of “democracy,” according to Cartledge, is that the “current global preoccupation with democracy and its global extension makes constant re-examination of the original ancient Greek versions imperative.” Forever hermetically sealed in that statement, however, are numerous assumptions and terms, the operationalization of which renders it hopelessly senseless, especially given the lack of multi-disciplinary epistemological analysis. Cartledge is a pre-eminent scholar of ancient Greek culture, history and politics. However, no discussion of “democracy” (however that term is manifested in any given time period) can omit close attention to global economic transformations, most notably, the industrial revolution and the transformation in general from a feudal system to an advanced capitalistic system.

Cartledge acknowledges the anti-democratic sentiment, for example, among some of the “founding fathers” of American government, but no discussion as to just how anti-democratic the U.S. really is. More curious is the lack of any discussion regarding how anti-democratic sentiment continued in his native England. Although the 1884 Reform Act increased male voting rights to include adult householders and men who rented unfurnished lodgings to the value of £10 a year, an estimated 40 per cent still did not have the right to vote as a result of their status within society. Women did not have the right to vote at all, while some men could vote twice, both at their place of business or university and at their home address. The ruling class held every advantage, and their contempt for the poor was undisguised. At the end of 1905, it would have been difficult for Diogenes to find a country under the sun where there was so deep a contempt for the poor and the meek held by the ruling class. Indeed, bedrock British philosophers like John Ruskin held a deep-rooted disbelief in democracy and saw the true instrument of social progress in the goodwill and intelligence of the upper classes.

Instead, Cartledge spends almost no time on “modern” philosophers, devoting half a page to Marx, but makes no mention of those philosophers who believed they had true visions of demokratia, e.g, Michael Bakunin. Nor does Cartledge mention the brief experiments with such visions that took place during the Paris Commune or the rise of such communities in Spain during the Spanish Civil War.

Cartledge’s tepid foray into unfamiliar academic territory is evidenced in his very brief discussion of what he considers the obstacles to the development of democracy in an ancient Greek sense, to wit, the subsuming of discussions of political rights to what he blithely labels “human rights” and the “re-injection” of religion, post 9/11.

Such faults aside, Cartledge has provided a compact but rich education in classics and ancient forms of democracy. He easily entertains while teaching us of the reforms of Solon and Ephialtes, the histories of Herodotus, Thucydides, and Polybius, and the philosophical writings of Aristotle.