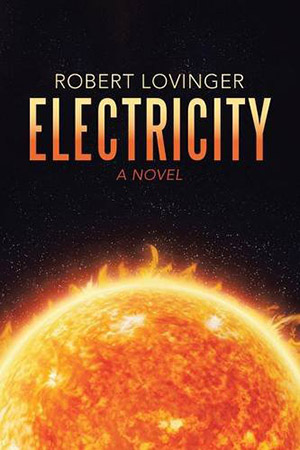 Electricity is an invigorating and addicting new science fiction novel that chronicles the happenings of a solar event that impacts the modern world. Robert Lovinger sets the scene perfectly, and introduces the reader to increasingly bizarre events in a way that stretches – but does not break – the tenuous willing suspension of disbelief. The protagonist of the book, a young professional man by the name of Charlie, acts as the perfect vehicle through which to explore the progression of the worldwide emergency. Charlie, through a series of brash decisions and serendipitous events, leaves his full-time job in the Boston political scene to become a tour guide for those who wish to see the Northern Lights.

Charlie has no experience with astronomy, astrophysics, or coronal mass ejections. However as the sun begins to pose a danger for life on Earth, Charlie becomes a resource to the top researchers in the world. Couple that with his continuing involvement in politics, and Charlie is uniquely positioned to give the reader a holistic and understandable view of the political, scientific, natural, and religious ramifications of such a threat.

The book, while splendid, will fall short for those who find great pleasure with character-driven stories. Lovinger sets up some interesting characters – interesting enough for readers to be marginally concerned for their well-being – but does little with character development. Many of the decisions characters make are presented in the way of inevitable truths, and are therefore not explained or even described. Emotions, which in such a setting are sure to be running high, are not made a priority in Lovinger’s writing. It leaves the readers wanting to delve into the psyche of Charlie, his parents and co-workers.

Despite the lack of focus on character development, the plot is perfectly paced and the storyline is suspenseful enough to solidly qualify this as a page-turner. The events are believable, and the subject is meticulously researched. Fans of the 2009 film Knowing, produced by Summit Entertainment, will enjoy this book. But not only them – general interest readers from high school into adulthood will find resonance with the plausibility of such a scenario. And, of course, anyone who has let their eyes drift towards the poles and contemplated the beautiful elusive lights that shine there will find this an exciting and pleasurable read.