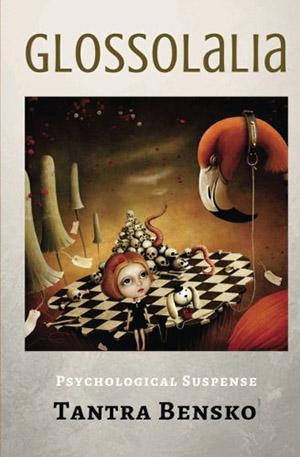 Tantra Bensko’s latest novel, Glossolalia is the first in her planned series, Agents of the Nevermind. The story opens in the office at D-CIDE as the primary character, Nancy, talks with her co-workers. They tease with her about her upcoming karate tournament as well as comment on how petite and pretty she is. D-CIDE is a pesticide company owned by her Uncle Geoff, who is her only living relative. She seems to be the only one who sees a truck drive away with what she believes to be XXX, a deadly banned chemical being housed in a restricted section of the factory. On a whim, she decides to pursue the truck and to report her uncle, who is also her benefactor, for allowing it to leave the grounds to pollute and kill somewhere in the community.

What follows is a tale filled with a convoluted combination of paranoia, sincerity, and innocence mixed with a dose of perceived personal and governmental manipulation. Though some of the twists and turns are overly foreshadowed and predictable, they are written by the hand of an expert in leading the reader through a steady series of dropped crumbs. At various points through the narrative, Nancy and the rest of the characters seem two-dimensional and cartoon-like in their simplicity within the complex activities going on around them. Yet Bensko’s writing makes it all come together in good form with well-developed main characters.

Glossolalia traverses the space between a pleasant and a jarring read. As Nancy progresses through the story’s landscape, the reader is regularly faced with questions as to which of the various revelations are real and which are illusions. The book cover refers to the novel as a “psychological suspense” and that it is. As such, it follows in the literary footsteps of Tom Robbins rather than that of Thomas Harris, which provides the likable, if odd, flavor.